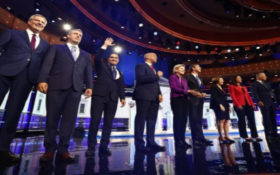 The 2020 Democratic presidential field is about to get one person smaller—and he’s decided to go out by attacking his fellow Democrats.

This man is slamming on the brakes just days after Senator Kamala Harris announced that she’s firing staffers at her Baltimore headquarters and putting all her chips on a big showing in Iowa.

For once, she’s a real leader: Barack Obama’s former HUD Secretary Julián Castro is following her lead in going out of business. Once the liberal media’s darling, he’s so unpopular his party might have forgotten he’s running.

Castro’s slashing his campaign staff, cutting jobs as his nearly-broke campaign stumbles into the early stages of a death spiral.

Castro’s announcement is making waves because it shows he’s on the verge of dropping out.

He says he’s going for a big win in Iowa and Nevada before snatching the presidential nomination… but his staffing decisions tell a different story.

Castro’s firing staff left and right in the next two states in the nomination battle: New Hampshire and South Carolina.

Look at it as Castro fessing up that he won’t be in the race after the Iowa Caucuses… if he makes it that far.

Castro’s threatened to quit the campaign trail within the past week, telling his supporters that he’d drop out of the contest if they didn’t send him $800,000 by Halloween.

His fundraising emails told his liberal donors this would be “Julián Castro’s last stand” if they didn’t open their wallets and “meet my do-or-die goal.”

He also said it wouldn’t be fair if the only Hispanic candidate in the race got bumped off the debate stage… but he announced Friday that his campaign had cleared enough cash to keep going.

He needs to hit three percent support, or 5 percent in a few early states, to make it to the November 20 debate in Atlanta.

He’s hardly a blip in the two states where Castro’s focusing his campaign—Iowa and Nevada. He registers one percent support in each of those states.

Castro is so obscure that his fellow candidates can’t remember his name…Joe Biden called him “Cisneros,” the HUD Secretary under Bill Clinton.

Still, Castro’s campaign says it’s going to use the money to buy $50,000 in “IMMEDIATE digital ads” for Iowa to “supercharge the coalitions needed to beat Donald Trump.”

But “a supercharger requires an engine with some gas, and Castro bus appears to be dangerously close to empty,” according to RealClearPolitics—so he’s going back to the well and playing the race card.

Castro’s campaign spokesman said everyone is “focused on the four white frontrunners for president,” but many of them are “unable to appeal to African American and Latino voters.”

“Candidates like Secretary Castro are poised for a breakthrough,” because he’s raising “issues others are afraid of.”

Even that copies Kamala Harris, who just said her race and sex is “the elephant in the room about my campaign.”

Harris said her fellow Democrats have “a lack of ability or a difficulty in imagining” a Black woman as president.

Why Castro and Harris would call their fellow Democrats too racist to back a Black woman or a Hispanic man is hard to tell. But Castro’s hoping things will work out better than it has for Harris, who keeps sinking in the polls.

Julián Castro got a small bump when his fellow Texan, Beto O’Rourke, called it quits.

Nine Texas state senators and state representatives who supported O’Rourke announced they’re now backing the other Texan in the race. But if they didn’t help Beto, how much will they help Castro?

Besides, as he gained a handful of state politicians, he lost a Texan in the U.S. House of Representatives, a Hispanic Democrat who endorsed Joe Biden.

Conservative Karen Townsend at Hotair.com wrote that “the rats are abandoning a sinking ship.”

In such a crowded field, rear-of-the-pack candidates like Castro are facing enormous pressure to bow out and let the “serious” candidates shine.

It won’t be long until Castro bails out of his own campaign—mark our words.