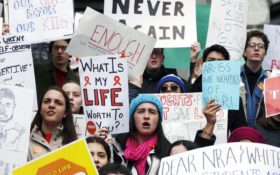 Tens of thousands of young people across the U.S. walked out of school to demand action on school safety Wednesday in one of the biggest student protests in decades.

Braving snow in New England and threats of school discipline in places like Georgia and Ohio, they carried signs and bowed their heads in prayer for the 17 dead in the Feb. 14 shooting at Marjory Stoneman Douglas High School in Parkland, Florida.

Across the country and beyond, students left class at 10 a.m. local time for 17 minutes — one minute for each of the dead in Florida. At some schools, students didn’t go outside but lined the hallways, gathered in gyms and auditoriums or wore maroon, the school color at Stoneman Douglas.

Over and over, students declared that enough is enough, that too many young people have died, and that they are tired of going to school in terror.

“I don’t want my mother or my father having to worry about me going to school getting an education and then my life is gone,” said Leticia Carroll, a 15-year-old freshman who helped organize a walkout of more than 100 students at Groves High School in Beverly Hills, Michigan, outside Detroit.

She added: “We need answers. We need something done.”

Alexia Medero, a 17-year-old at Parkland High School outside Allentown, Pennsylvania, said the issue has too easily fallen by the wayside after past tragedies.

“Families are being torn apart, futures are being stolen, lives are being lost. But we must ensure they are not forgotten,” she said.

In Washington, more than 2,000 high-school age protesters observed the 17 minutes of silence by sitting on the ground with their backs turned to the White House as a church bell tolled.

Some schools applauded students for taking a stand or at least tolerated the walkouts, while others threatened punishment.

About 10 students left Ohio’s West Liberty-Salem High School — which witnessed a shooting last year — despite a warning they could face detention or more serious discipline.

Police in the Atlanta suburb of Marietta patrolled Kell High, where students were threatened with unspecified consequences if they participated. Three students walked out anyway.

Education Secretary Betsy DeVos had no immediate public comment on the walkout.

Historians said the demonstrations were shaping up to be one of the largest youth protests in decades.

“It seems like it’s going to be the biggest youth-oriented and youth-organized protest movements going back decades, to the early ’70s at least,” said David Farber a history professor at the University of Kansas who has studied social change movements.