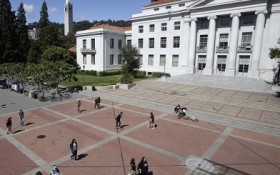 It’s one of the most liberal college’s in the world. Now, if students have their way, they’ll be providing on-demand abortions on campus — and demanding taxpayers foot part of the bill.

The University of California in Berkeley (UCB) could provide on-campus access to abortions if a student senate bill successfully sways the administration.

Senate Resolution 69 (SR 69), a bill that would bring abortion providers to campus clinics, passed a final round of voting Wednesday during a weekly student senate meeting.

The bill argues that inaccessibility to abortion is a violation of women’s rights and impedes academic progress. Since, the bill suggests, women make up a majority of the undergraduate student population, it is only just they be provided with any means necessary to eradicate whatever may get in the way of academic success.

“When medication abortion is not available at UHS (University Health Services), students who are seeking an abortion face financial, time, and travel constraint burdens that create negative impacts on academic performance and mental health,” the bill states. “UHS is a health center dedicated to meeting the health needs of students in order for students to be able to upkeep their academic well-being. Abortion is a common health-care service and access to abortion is necessary and relevant in student life.”

The bill employs several statistics to reinforce its logic, including things like: women aged 18-24 account for 44 percent of all abortions in the United States, one in four women will have an abortion by age 30, and women make up 52 percent of UCB’s undergraduate population.

The argument, it seems, is that college-aged women, especially if they have a dominant presence on campus, deserve easy access to abortion since they are the demographic that is statistically most probable to need one in the first place.

The bill also notes that abortion services were available on campus in the 1980’s but have since been abolished because of a lack of trained abortion providers. Now, however, the bill states that there are many trained professionals working in the school’s health office who could very well provide students with abortions.

“Currently, Tang [Center, the school’s clinic] does have staff trained/skilled abortion providers and is able to provide medication abortion,” the bill states.

The bill neglects to explain where funding for on-campus abortions would come from. Since UCB is a public school, though, taxpayer dollars would likely help provide students with access to abortions.

Aanchal Chugh, primary sponsor of the bill, told Campus Reform she thinks funds for abortions should be taken from administrator’s paychecks.

Campus Reform reached out to Chancellor Nicholas Dirks and Provost Claude Steele to see if either would be willing to take a pay cut in order to fund abortions but neither replied in time for publication. This story will be updated if a response is received.

Whether administrators are willing to take a pay cut or not, Chugh says she does not think students should have to contribute funds for these on-campus abortions in any way.

“The resolution does not expect students to pay for these services as I, and those who voted for it, believe that health is a right not a privilege,” she added. “The university should be providing this right to all students.”

After several calls, UCB’s Executive Director of Communications and Media Relations Roqua Montez responded by email to explain that “the question is larger than the one regarding cost.”

Campus Reform reached out Monday to ask exclusively about the potential cost of bringing abortions to campus.

Montez did, however, reiterate the school’s full support of a woman’s right to abortion.

“UC Berkeley’s University Health Services fully supports women’s access to the full spectrum of contraception, emergency contraception, abortion and other pregnancy alternatives,” Montez said. “Fortunately, the Berkeley campus is surrounded by a high-quality, well-established network of health providers who are expert [sic] in this area.”