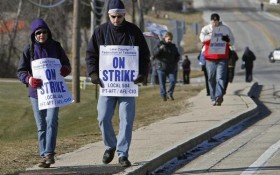 An Illinois teachers’ union is being accused of unreasonable greed after they’ve rejected multiple offers of salaries up to nearly $80,000 a year and $2,000 in bonuses across the board.

And a strike that has kept some of the state’s poorest kids out of school for nearly a month — including children whose parents can’t afford care during the day — is showing no end in sight.

The strike began Oct. 1 after union members rejected a tentative deal between their representatives and the school district in East St. Louis, a poor community of about 27,000 residents in southwestern Illinois that is across the Mississippi River from St. Louis.

The district, which has been under state control since 2011 because of its poor performance, says it needs to save $10 million over the next 10 years. Under the rejected deal, teachers would have received a one-time payment of $2,000 and raises, but it would take more time for teachers to reach the top salary scale. The increased time would put these teachers more in line with the standard used in the rest of the country.

The strike is bad news for a city where only 5 percent of high school ACT takers are considered ready for college and less than 20 percent of the district’s more than 6,000 students — all of whom qualify for reduced-price or free lunches — meets expectations on statewide standardized tests.

Some aren’t waiting for a resolution and have decided to move or transfer to other districts. Nearly 50 had done so as of Sunday.

In East St. Louis, where 98 percent of residents are black, nearly half of residents live below the federal poverty line and the average household income is just over $19,000 per year and parents are struggling to find care for their kids while they work.

Mayor Emeka Jackson-Hicks recently pleaded with the teachers “to put the needs of our children first by seeking a reasonable compromise so that our children suffer no longer.”