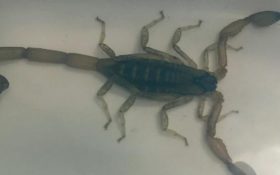 A Pennsylvania man is recovering after he was stung by a scorpion that somehow got into his backpack while he was on vacation in the Caribbean.

The 22-year-old Warminster resident had returned home from St. Thomas and reached into the pack to get his computer when he was stung.

Buddy Mullen of A-1 Exterminators tells WPVI-TV in Philadelphia the scorpion disappeared in the man’s bedroom. Mullen’s team flipped the sheets and the scorpion fell to the floor.