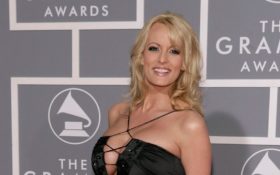 Adult film star Stormy Daniels has kept her name in the headlines by claiming to have had an affair with President Donald Trump over a decade ago — and the mainstream media can’t get enough of her controversial story.

Despite changing her story multiple times, Daniels was invited to appear on CBS News’ “60 Minutes” last weekend. In her apperance, Daniels shared new details on what critics call a conveniently evolving story.

Daniels asserted that the alleged affair was consensual but also said she was required to sign a non-disclosure agreement about her friendship with Trump.

The part of Daniels’ “60 Minutes” story that raised eyebrows the most was her claim that an unknown man approached her in a parking lot in Las Vegas, seemingly from out of nowhere, threatened her into silence.

Late in her interview with anchor Anderson Cooper, Daniels claimed she would easily recognize this unnamed man again — and Malzberg jumped on that information to challenge the authenticity of her entire tale.

I challenged #StormyDaniels to go to a sketch artist and let's see who "threatened" her in a parking lot. Remember #StormyDanielsInterview she said she would recognize him in a minute. .@MalzbergShow @realDonaldTrump #tcot @andersoncooper https://t.co/EBDStU91cn

In a recent television appearance, Malzberg expanded on his challenge.

He went on to point out the double standard of the mainstream media regarding the claims.

“First of all, Stormy Daniels said she lied. She signed an affidavit. She admitted she lied. She lied, she lied, she lied! And now she says she was threatened in a parking lot?” Malzberg said. “She told Anderson Cooper, ‘If I see that guy again, I’ll know exactly who he is.’ Challenge: Go to a sketch artist. Describe him. And let’s see it now. I’ll pay for it.”

It will be interesting to see if Daniels takes up Malzberg’s offer — or if she’ll change her story again.