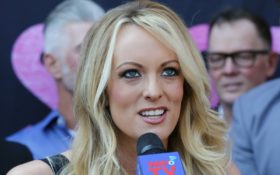 Adult film star Stormy Daniels made headlines over the weekend when she defended First Lady Melania Trump in the British tabloids. Daniels called for an end to the speculations about Melania’s feelings on Melania.

Daniels, whose real name is Stephanie Clifford, told the British tabloid The Mirror, that “people should stop speaking for her” because maybe she is “happy” with President Donald Trump.

Since the 2016 presidential election, the mainstream media has cast a spotlight on the first family, painting a picture of a broken marriage — and Daniels claims that may not be true.

“People should stop speaking for her. Maybe she’s happy. Everything we say about her is a projection. Some people misplace sorrow and pity on another person,” Daniels told the outlet.

Recently, unproven rumors have swirled among liberal critics that Melania feels trapped and is miserable in her marriage to Trump.

Daniels stated, “The entire world would be interested to know what she feels. But if we never know, that is her right and I support it.”

Recently, former Trump adviser Omarosa Manigault-Newman speculated in her novel “Unhinged: An Insider’s Account of the Trump White House” that Melania wants to divorce the president.

“In my opinion, Melania is counting every minute until he is out of office and she can divorce him,” Omarosa wrote in her book.

The first lady’s office has pushed back against Omarosa’s unproven claims ,stating they believe she is “lashing out and retaliating in such a self-serving way,” adding that Melania and Omarosa “rarely, if ever, interacted.”