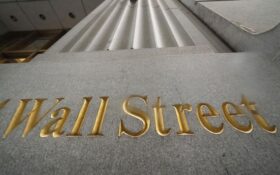 Stocks are wavering between gains and losses on Wall Street Friday, as uncertainty about the war in Ukraine and inflation continues to knock markets around.

The S&P 500 was 0.4% lower in afternoon trading, European stocks were up more solidly and crude oil prices were climbing more than 2% after flip-flopping earlier in the day.

They’re the latest swings for global markets, which have been rocked by dramatic hour-to-hour reversals in prior weeks. Markets are struggling to guess how high Russia’s invasion of Ukraine will send prices of oil, wheat and other commodities produced in the region. That’s raising the risk the economy may struggle under a toxic combination of persistently high inflation and stagnating growth.

Early Friday, before Wall Street opened, the pendulum was swinging toward optimism. European stocks and U.S. stock futures rose abruptly after comments from Russian President Vladimir Putin that some analysts saw as surprisingly optimistic. Putin cited “certain positive developments” in negotiations with Ukraine, though he didn’t offer any details.

The S&P 500 opened with a 0.7% gain, but it quickly flipped to a loss after a reading on sentiment among U.S. consumers sank more than economists expected. Household expectations are rising for high inflation to remain in the near term, causing unease.

More swings are likely ahead for markets because so much uncertainty remains about the war in Ukraine and inflation. President Joe Biden announced Friday that along with the European Union and the Group of Seven countries, the U.S. will revoke “most favored nation” trade status for Russia. The move allows for tariffs on Russian imports.

Amid all the uncertainty, U.S. stocks remain about 10% below their peak from earlier this year, while crude oil prices remain more than 40% higher for 2022 so far.

A barrel of U.S. crude oil rose 3.4% to $109.52. It briefly topped $130 earlier this week. Prices have sloshed around as worries about disrupted supplies joust with hopes for peace and the possibility that countries outside Russia could boost their production.

European stocks rallied more than the rest of the world, with the German Dax returning 1.4% and the French CAC 40 up 0.9%. Asian markets earlier in the day were mixed, with Japan’s Nikkei 225 falling 2.1% and stocks in Shanghai adding 0.4%.

Markets were already on edge before Russia’s invasion, as central banks are set to raise interest rates and remove support for the economy put in place after the pandemic. The Federal Reserve and other central banks hope to stamp out the highest inflation in generations, though they also risk causing a recession if they raise rates too high or too quickly.

The wide expectation is for the Federal Reserve to raise its key short-term interest rate by a quarter of a percentage point next week, which would be the first increase since 2018. The yield on the 10-year Treasury has climbed back to around 2% to return to where it was in February, before worries about the war in Ukraine sent it tumbling below 1.70%.

Inflation has surged high enough that politicians around the world know they may be in trouble because of it.

Brazil’s state-run oil company Petrobras on Friday increased its prices of fuels sold to its distributors by as much as 25%, citing the war between Russia and Ukraine, as official data showed inflation accelerated in February.

The company said in a statement announcing the increase the prior day that for weeks it refrained from passing on costs, but consistently high oil prices forced the adjustment to ensure supply to the Brazilian market.

Prices rose 1% in February, the most for the month since 2015 and driving 12-month inflation to 10.5%, according to data the national statistics institute released on Friday.

In a radio interview earlier this week, Brazil’s president said it is wrong for Petrobras to set prices in accordance with international levels and that his administration was seeking a solution. He also said ordinary people wouldn’t be able to cope with a massive increase to match international pricing. President Jair Bolsonaro is planning to run for re-election in October despite slumping approval ratings.

In the U.S., a report on Thursday showed prices at the consumer level leaped 7.9% last month from the prior year, the hottest inflation rate since 1982. It’s likely to get worse in the near term due to oil’s surge following the war and all the financial penalties the U.S. and allies imposed on Russia.

Biden has said he wants to limit the economic pain for U.S. households but acknowledged that “defending freedom” incurs costs.