Stocks pulled down by Big Tech - The Horn News 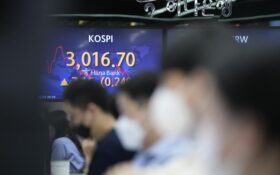 Stocks are falling at the open on Wall Street Friday, following European and Asian markets lower as leaders of the Group of 20 large and fast-growing economies meet in Rome to confront a faltering recovery.

Some Big Tech stocks were dragging major indexes off record highs set earlier in the week. The S&P 500 was down 0.4% in the first minutes of trading. Amazon is down 4.9% and Apple fell 3.5%. Investors also focused on a raft of macroeconomic data, including the lag in consumer spending and high — but slowing — inflation last month. Exxon Mobile bucked the trend, rising nearly 1%.

Global shares were mostly lower on Friday despite the latest rally on Wall Street.

How the pandemic plays out in the months ahead remains high on investors’ concerns. IHS Markit said in a report that the progress in the global vaccination rollout appeared to be helping contain damage from the coronavirus pandemic.

“The current COVID-19 delta wave has shown a significant decline in daily new cases reported during September and October 2021, although the pandemic still remains a key risk to the near-term economic outlook,” it said.

Japan’s benchmark Nikkei 225 recovered after falling in morning trading to finish up 0.3% at 28,892.69, as investors mostly took a wait-and-see attitude ahead of the nationwide parliamentary elections Sunday.

The ruling Liberal Democratic Party, which has ruled almost continuously for decades, is expected to stay in power. But the opposition is also expected to gain ground because of public discontent over the government’s handling of the coronavirus pandemic and worries about the economy.

Both the pace of economic growth and the state of the jobs market are on investors’ minds as they look ahead to the Federal Reserve’s meeting next week to see how it moves forward with plans to trim bond purchases and its position on interest rates.

Rising energy prices have also raised concerns about the cost for consumers as they pay more to fill gas tanks and heat homes. U.S. crude oil prices have jumped more than 70% so far this year.

Benchmark U.S. crude gained 6 cents to $82.87 a barrel in electronic trading on the New York Mercantile Exchange. It picked up 15 cents to $82.81 per barrel on Thursday. Brent crude, the international standard, rose 21 cents to $84.53 a barrel.