Stimulus checks arrive on THIS date... - The Horn News 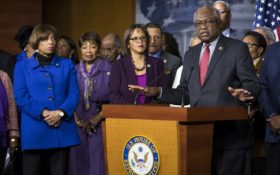 But nonetheless, another round of coronavirus stimulus payments will be heading out to Americans very soon.

House Majority Whip James Clyburn told MSNBC that the money may go out as early as next week, depending on a House vote scheduled to take place this Wednesday.

“I’m very hopeful that by the beginning of next week, some relief can be realized,” he said.

“That’s my thought,” he told network host Kristin Welker. “I used to run a state agency. I know what it’s like being an administrator.”

There will, however, be changes to this round of stimulus checks.

President Joe Biden will not be attaching his signature to the $1,400 relief checks that are expected to be mailed soon — a break with his predecessor who last year had “President Donald J. Trump” printed on the economic impact payments approved by Congress.

The next round of paper checks will bear the signature of a career official at the Treasury Department’s Bureau of the Fiscal Service, White House press secretary Jen Psaki said at a Tuesday briefing.

House Democratic leaders said Tuesday that they have the votes to give final congressional approval to Biden’s $1.9 trillion COVID-19 relief bill. The passage has not been in serious question, but the leaders’ confidence underscored the unity Democrats have shown during the effort to bypass Republican opposition.

House approval, four days after the Senate passed a modestly reworked version of the package, will clinch Biden’s most significant early legislative achievement.

Psaki said the goal was to get the payments out quickly instead of branding them as coming from Biden.

When the first round of checks were released, the former president said, “I’m sure people will be very happy to get a big, fat, beautiful check and my name is on it.”

Besides those checks, the incredibly expensive bill also extends jobless benefits to early September, instead of expiring on March 14. It spends huge amounts on COVID-19 vaccines, testing, and treatments, while also giving large sums to state and local governments and schools, assisting small businesses, and providing major expansions of tax breaks and programs for many.

Progressives suffered setbacks, especially the Senate’s removal of a gradual minimum wage increase to $15 hourly by 2025. But the measure carries so many Democratic priorities that final passage was not in doubt, despite the party’s narrow 10-vote House majority.

“There’s not going to be a problem” with the vote, House Speaker Nancy Pelosi, D-Calif., told reporters Tuesday.

Clyburn noted that Oregon Rep. Kurt Schrader, one of just two Democrats who opposed an initial version of the bill that the House approved last month, has said he’ll support it now because it provides “lifeline” aid for so many people.

“We lost two the first time,” Clyburn said. “I think we have at least cut it in half.”

The only other Democrat who opposed the measure last month was Maine Rep. Jared Golden.