Trump FIRES BACK at Steve Bannon over new book (wow...) - The Horn News 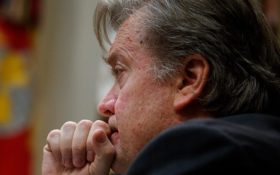 In the new book “Fire and Fury: Inside the Trump White House” written by Michael Wolff, Bannon called Trump’s son’s contact with a Russian lawyer “treasonous.”

Hitting back via a formal White House statement, Trump insisted Bannon had little to do with his victorious campaign and “has nothing to do with me or my Presidency.”

“When he was fired, he not only lost his job, he lost his mind,” Trump said Wednesday.

In the scathing new book, Wolff — a New York media gossip columnist — claims Trump is a leader who doesn’t understand the weight of the presidency.

Harder sent a letter to Bannon saying the former Trump aide violated confidentiality agreements by speaking with Wolff. The letter demanded Bannon “cease and desist” any further disclosure of confidential information. Bannon did not immediately respond to a request for comment.

White House aides were blindsided when early excerpts from the book were published online by New York Magazine and other media outlets ahead of the Jan. 9 publication date.

The release left Trump “furious” and “disgusted,” said White House Press Secretary Sarah Huckabee Sanders, who complained that the book contained “outrageous” and “completely false claims against the president, his administration and his family.”

Asked what specifically had prompted the president’s fury with Bannon, she said: “I would certainly think that going after the president’s son in an absolutely outrageous and unprecedented way is probably not the best way to curry favor with anybody.”

In an advance copy of the book, Bannon is quoted as describing a June 2016 meeting at Trump Tower between Donald Trump Jr., Trump campaign aides and a Russian lawyer as “treasonous” and “unpatriotic.”

“They’re going to crack Don Junior like an egg on national TV,” Bannon was quoted as saying in one section that was first reported by The Guardian.

A spokeswoman for Bannon did not immediately respond to a request for a comment. Trump Jr. lashed out in a series of tweets, including one that said Andrew Breitbart, the founder of the Breitbart News site that Bannon now runs, “would be ashamed of the division and lies Steve Bannon is spreading!”

Andrew Breitbart would be ashamed of the division and lies Steve Bannon is spreading!

Steve had the honor of working in the White House & serving the country. Unfortunately, he squandered that privilege & turned that opportunity into a nightmare of backstabbing, harassing, leaking, lying & undermining the President. Steve is not a strategist, he is an opportunist

Bannon, who was forced out of his White House job last summer, was reportedly not surprised by the blowback. Bannon vowed on Wednesday to continue his war on the Republican establishment and also predicted that, after a cooling-off period, he’d continue to speak with Trump, who likes to maintain contact with former advisers even after he fires them.

The current Breitbart News head has told associates that he believes Trump has been ill-served by some his closest allies, including eldest son Don Jr. and Jared Kushner, the president’s son-in-law. Bannon believes that Trump would be able to accomplish more without them

Trump, up until Wednesday, had been complimentary of Bannon, saying in October that the two “have a very good relationship” and had been friends for “a long time.”

In the book, Bannon also speaks critically of Trump’s daughter and White House adviser, Ivanka, calling her “dumb as a brick.”

“A little marketing savvy and has a look but as far as understanding actually how the world works and what politics is and what it means — nothing,” he is quoted saying.

The tone of the book, which claims Trump never wanted to be president despite spending months on a grueling campaign trail, has been slammed by the White House.

“The book is clearly going to be sold in the bargain fiction section,” First Lady Melania Trump’s spokeswoman said in a statement.

Indeed, Huckabee Sanders said Wolff “never actually sat down with the president” and had spoken with him just once, briefly, by phone, since Trump had taken office.

She also said the vast majority of interviews Wolff conducted with other White House officials were done at Bannon’s request.

Bannon’s comments in the book are just his latest published criticism of the president and his family. In a Vanity Fair piece late last year, he was quoted telling friends and advisers that Trump had “lost a step” since his swearing-in.