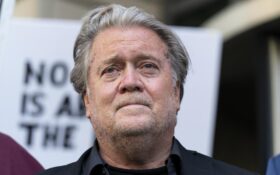 Steve Bannon has made a career as a vocal ally of former President Donald Trump. Bannon rose to fame as executive chairman of Breitbart News, and he kept rising during his time as Trump’s chief strategist, a newly created job.

Since leaving the White House in 2017, Bannon has invited questions about his influence as a strategist, amid his campaigns for unsuccessful candidates.

Now, Bannon’s career is headed toward an inflection point.

He’s scheduled to be sentenced Friday after being convicted of defying a subpoena from the House panel investigating the Jan. 6 insurrection at the U.S. Capitol.

The House committee had sought Bannon’s testimony over his involvement in Trump’s efforts to overturn the 2020 presidential election. Bannon has yet to testify or provide any documents to the committee, prosecutors wrote.

Prosecutors argued Bannon, 68, deserved the longer sentence because he had pursued a “bad faith strategy” and his public statements disparaging the committee itself made it clear he wanted to undermine their effort to get to the bottom of the violent attack and keep anything like it from happening again.

“The rioters who overran the Capitol on January 6 did not just attack a building — they assaulted the rule of law upon which this country was built and through which it endures,” the prosecutors wrote in a filing obtained by the New York Post. “By flouting the Select Committee’s subpoena and its authority, [Bannon] exacerbated that assault.

The defense, meanwhile, said he wasn’t acting in bad faith, but trying to avoid running afoul of executive privilege objections Trump had raised when Bannon was first served with a committee subpoena last year.

The onetime presidential adviser said he wanted to a Trump lawyer in the room, but the committee wouldn’t allow refused. Bannon had been fired from the White House in 2017 and was a private citizen when he was consulting with the then-president before the riot.

Bannon also pointed out that he had offered to testify after Trump waived executive privilege. But that was after the contempt charges were filed, and prosecutors say he would only agree to give the deposition if the case was dropped.

The prosecutors wrote in the filing, “A person could have shown no greater contempt than the Defendant did in his defiance of the Committee’s subpoena.” Sure enough, the prosecution is pushing for the maximum fine, arguing that Bannon refused to answer routine questions about his income and insisted he could pay whatever the judge imposed.

Bannon’s fate will likely become clearer sometime on the morning of Friday, Oct. 21.

Meanwhile, other Trump allies have been taking the stand, as well.

U.S. Sen. Lindsey Graham must testify before a special grand jury investigating whether or not then-President Donald Trump and others illegally tried to influence the 2020 election in Georgia, a federal appeals court said Thursday.