Steve Bannon has an urgent message for Republicans - The Horn News 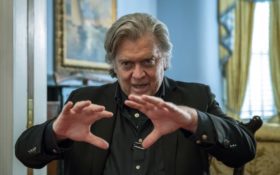 Steve Bannon has a dire warning for Republicans.

During a Sunday interview with The Associated Press, the former chief strategist to President Donald Trump said he believes the GOP would lose 35 to 40 seats in the House if the election were held today, thereby ceding their majority to Democrats he’s convinced will pursue impeachment. He argued there’s still time to turn that around and is launching a group, Citizens of the American Republic, to pitch the election as a vote to protect Trump from that outcome.

“You can’t look at this as a midterm and you can’t run it out of the traditional Republican playbook. If you do that, you’re going to get smoked,” said Bannon, arguing that Republicans must redouble efforts against motivated Democrats.

The effort is a test of Bannon’s sway in the GOP a year after he was fired from his White House post. His relationship with Trump soured after a tell-all book published in January included searing quotes of Bannon portraying Trump as undisciplined and criticizing son Donald Trump Jr. His stock fell further after he stuck by Alabama Republican Roy Moore’s Senate campaign even after decades-old sexual misconduct allegations emerged. A reliably Republican Senate seat turned Democratic.

As he attempts a comeback, Bannon acknowledged the challenges he faces, including an invigorated Democratic base. Less than three months from Election Day, Democrats need a net gain of 24 seats to retake the House, and the party is increasingly bullish about its chances after strong turnout in a series of special elections. Bannon said Republicans can gain ground if they focus on turning out Trump supporters.

“This is not about persuasion. It’s too late to persuade anybody. We’re 90 days away from this election. This is all about turnout and what I call base-plus,” he said.

While Bannon makes his move, many Republicans view holding the House as an uphill battle. The White House did not immediately respond to a request for comment.

Bannon said his new venture will focus on rapid response and polling with the goal of framing the election as an “up or down vote” on Trump and impeachment. He is also releasing a movie about the president, “[email protected],” geared at Trump supporters.

Bannon said he was being backed by private donors, but he did not detail who was funding the effort or how much he had raised. He said his efforts were independent of the Republican National Committee, the White House or a Trump-supporting super PAC.

In keeping with his midterm mission, Bannon defended the president on both policy and style, arguing that the president had an economic record to run on and has been making the right pitch on the campaign trail.

On trade, Bannon backed the president’s aggressive tariffs, which have drawn criticism in agricultural states crucial to Trump’s victory. He argued they were a key part of Trump’s nationalistic economic strategy.

“People in Iowa, once it’s explained to them, will fully support the president in this,” he said. “We don’t have a choice. We either win the economic war with China or we’re going to be a secondary, a tertiary power.”

He said Trump’s culture wars, which have included public attacks on women and minorities, don’t present a problem, calling it his “house style” and saying people should “separate out the signal from the noise.” He argued that Trump would benefit from shutting down the government over funding for his border wall, saying it would “galvanize the populist right,” though he acknowledged it was a minority view.

Bannon also pushed back against the idea that a loss of the House could be a positive development for Trump as it would give him a new foil heading into the 2020 presidential election. He called such notions “dangerously naive.”

“He’s a fighter and people are looking for fighters,” Bannon said of Avenatti, though he believes Trump would defeat any opponent. “He’s going to be a force in the primary for the simple reason that he comes across as what many of the Democrats don’t, which is a fighter.”