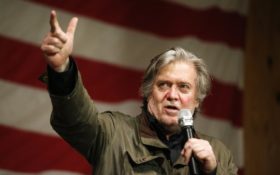 “The days of taking it silently are over,” Bannon declared at a rally that drew hundreds of Moore supporters to a local farm in the southwestern corner of the state.

Even if he isn’t well-known in this heavily Republican county, Bannon’s appearance was a welcome development for Moore, who has been shunned by the Republican Party’s biggest stars. Trump himself agreed to campaign later in the week in nearby Florida, but many national GOP leaders say the allegations against Moore are credible and he shouldn’t serve in the Senate.

Earlier in the day, Senate Majority Leader Mitch McConnell said that Moore, if elected on Dec. 12, would “immediately have an issue with the Ethics Committee” — a process that could lead to his ultimate expulsion from the Senate. Some Republicans, including Colorado Sen. Cory Gardner, have already promised expulsion.

Another Republican, Arizona Sen. Jeff Flake, sent a $100 check to Moore’s Democratic opponent, Doug Jones on Tuesday. He tweeted a picture of the check and the words, “Country over party.”

And Romney, the 2012 Republican presidential nominee, said this week that Moore would be “a stain on the GOP and the nation.” ″No vote, no majority is worth losing our honor, our integrity,” Romney tweeted.

Bannon was most aggressive Tuesday night with Romney, charging that Moore had more integrity and honor than Romney’s entire family. He noted that Moore graduated from the United States Military Academy, while Romney received a draft deferment for his missionary work in France.

“You hid behind your religion,” Bannon said. “Do not talk to me about honor and integrity.”

Bannon’s presence had less to do with Moore’s religious convictions than with their shared disdain for Washington Republicans.

“I know we do not need transgender in our military,” Moore said. “If I’m in a foxhole, I don’t want to know whether this guy next to me is wondering if he’s a woman or a man.”

Moore was twice removed from his state Supreme Court position, once for disobeying a federal court order to remove a Ten Commandments monument from the lobby of the state judicial building and later for urging state probate judges to defy the U.S. Supreme Court decision that legalized gay marriage.

Bannon is far more focused on economic populism and immigration. But, like Bannon, Moore has promised to stand up to McConnell, a Republican who is deeply unpopular among many diehard Trump supporters.

“They don’t want somebody up there with an independent mind,” Moore said.

Bannon has resumed his leadership role at the pro-Trump Breitbart News and launched a broad campaign to take down establishment Republicans across the nation.

“What Steve does is he motivates base voters to turn out, which is the entire key to this election,” said Andy Surabian, senior adviser to the outside group Great America Alliance, which sometimes works with Bannon.

Moore may get a bigger boost Friday when Trump hosts a campaign-style rally in Pensacola, Florida, which is less than 20 miles (32 kilometers) from the Alabama border. The Republican president formally endorsed Moore on Monday and directed the Republican National Committee to send some financial assistance after withdrawing roughly a dozen staffers last month.

The RNC made two transfers to the Alabama GOP this week designed to benefit Moore’s campaign — one of $50,000 and another of $120,000 — according to one RNC official who was not authorized to speak publicly.

Earlier in the day, roughly 250 miles (more than 400 kilometers) to the north, Moore’s Democratic opponent called Moore an embarrassment who would be a “disaster” for Alabama in Washington.

“I damn sure believe that I have done my part to ensure that men who hurt little girls should go to jail and not the United States Senate,” Jones said during a campaign stop in Birmingham, referring to his own record as a former federal prosecutor.

But some in Alabama welcomed Moore’s hardline devotion to Christian conservative values and attacks on the Republican establishment.

Frank Blakeman, a former history teacher from nearby Foley, Ala., described Moore as a continuation of Trump’s conservative movement.

“There has been a tug in this country overall to one side,” Blakeman said before the rally. “I think Roy Moore represents the wish and desire of the other half of the country to pull that back across. Is he extreme in some of his views? Yes, I think he is. Since politics is a tug of war, you need people to pull to at least get it back somewhere in the middle.”