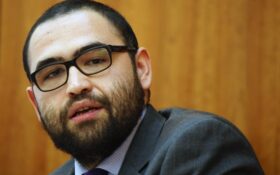 A state senator says he received anonymous threatening telephone messages after publicly criticizing people for gathering without masks at a political demonstration outside the state Capitol, and that he fears for his safety.

State Sen. Jacob Candelaria said Sunday that he received a series of profanity-laced telephone voice messages. A male caller accused the Democratic senator from Albuquerque of not knowing what it means to be an American and said that “we’re going to get you out one way or another.” Candelaria took the message as a possible death threat.

Another message included homophobic slurs against the openly gay legislator and attorney.

The foul messages were left hours after Candelaria appeared in a TV newscast Saturday night to criticize as risky and irresponsible a rally in which a few hundred demonstrators gathered outside the Statehouse mostly without masks to urge the governor to reopen the economy and denounce pandemic restrictions. Campaign flags for President Donald Trump were on prominent display.

State health officials have banned gatherings of more than five people and mandated masks in public, with a variety of restrictions on businesses, amid a series of record-setting statewide daily tallies for COVID-19 infections in recent days.

Candelaria said he was fleeing Albuquerque for his safety and the safety of his spouse. He described the response from local and state law enforcement authorities as inadequate in light of credible recent threats against politicians such as Michigan Gov. Gretchen Whitmer.

Candelaria said he grew more alarmed after tracing one phone number to a man with outstanding warrant for arrest, with help from a private investigator.

“I have no idea how I can keep my family safe right now other than leave,” Candelaria said. “They do not have the right to make death threats like this and have it go unaccountable.”

Candelaria said State Police officers arrived at his home after more than 12 hours. Candelaria said he grew frustrated when officers suggested the voice messages were not necessarily a threat.

Gilbert Gallegos, a spokesman for the Albuquerque Police Department, said Sunday that a city officer contacted Candelaria after his initial 911 call and arranged a type of periodic surveillance of the senator’s home. He said State Police are leading the investigation.