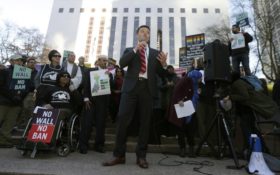 The State Department says President Donald Trump’s travel ban on citizens of six mainly Muslim countries, North Korea and Venezuela is now fully operational. The announcement follows the Supreme Court’s decision earlier this week to allow enforcement of the ban as it is challenged in lower courts.

The department said it began fully implementing the ban at the opening of business at all U.S. embassies and consulates on Friday.

The administration says the restrictions are based on an assessment of each country’s security situation and its willingness to share information. Critics say the measure is an attempt to bar Muslims from coming to the U.S.