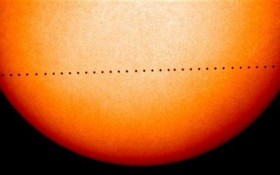 Mercury has begun a relatively rare move across the sun.

The solar-planetary ballet got underway just after 7 a.m. on the east coast with the smallest planet appearing as a tiny black dot on the face of the sun. The transit will last for a total of about 7½ hours. The last time it happened was 2006. It will happen again three years from now, but then not until 2032. NASA says the event occurs only about 13 times a century.

The entirety of Mercury’s journey will be viewable to the eastern U.S. and Canada, as well as most of western Europe and South America.

To catch a glimpse, viewers need binoculars or telescopes with protective solar filters. Mercury’s journey can also be seen via a livestream on NASA’s website .