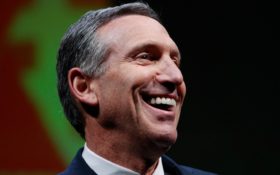 Despite thousands of homeless American veterans and unemployed citizens eager for work that are already here, Starbucks CEO Howard Schultz announced Monday his company plans to hire 10,000 refugees over the next five years at its coffee shops.

The response was breathtaking. On social media, the hashtage #BoycottStarbucks began trending, and conservatives immediately began speaking out — with their wallets.

As of noon Tuesday, the individual share price of NASDAQ:SBUX was down nearly 1% on the day. Since trading opened Monday, the company’s stock price is down over 1.5%.

This isn’t the first time Schultz has gotten his company in trouble with his extreme political views. In September last year, a similar boycott was announced with Schultz endorsed former Democratic presidential candidate Hillary Clinton.

“Hopefully Hillary Clinton will be elected president,” Schultz told CNN when he called her the “obvious” choice.