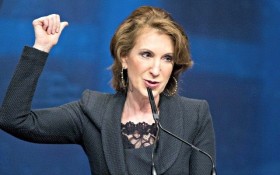 While speaking in San Antonio to the National Association of Women Business Owners, part of the stage Republican presidential candidate Carly Fiorina was on collapsed.

No one was hurt by the falling curtains and poles, according to reports. Fiorina wasn’t shaken up by the incident, and continued to answer questions after.

A reporter for the Texas Tribune, Patrick Svitek, posted a video of the incident.

And the stage just collapsed on @CarlyFiorina in San Antonio. Everyone appears OK. pic.twitter.com/PFzWtui4ks