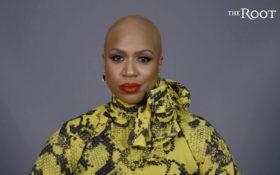 Rep. Ayanna Pressley, D-M.A., whose hair twists have been an inspiration to young girls and part of her personal identity and political brand, said Thursday that she has gone bald due to the auto immune condition alopecia.

The freshman Massachusetts Democrat made a touching video for The Root, the African American-focused website, in which she revealed her bald head and said she felt compelled to go public due to the impact her Senegalese twists had on supporters.

Senegalese twists are a protective hairstyle worn by black women, much like braided hairstyles. Her style was noteworthy in how Afrocentric it was. In many corporations, black women are expected to wear their hair straightened (though their hair tends to be more coily) and the legacy of black women wearing their hair close to or in its natural state is fraught and intertwined with the legacy of racism.

She called her hair story “both personal and political” as she embraced her twists, but noticed back in the fall that her hair was falling out. The hair loss progressed in chunks until the night before the Dec. 18 House vote on impeachment articles against President Donald Trump, when she said she lost the last of it.

“I didn’t have the luxury of mourning what felt like the loss of a limb,” Pressley said. “It was a moment of transformation not of my choosing.”

She donned a wig, explained her vote from the podium on the House floor, then fled to a bathroom stall.

“I felt naked, exposed, vulnerable. I felt embarrassed. I felt ashamed. I felt betrayed,” Pressley said. “And then I also felt that I was participating in a cultural betrayal because of all the little girls who write me letters, come up to me, take selfies with me. Hashtag twist nation.”

Pressley kept her hair loss a secret, revealing her condition only to close friends and family, but she knew she would go public when she felt ready.

Alopecia areata is a common autoimmune skin disease, causing hair loss on the scalp, face and sometimes on other areas of the body, according to the website of the National Alopecia Areata Foundation. The National Institutes of Health says nearly 2% of Americans have the disease.

Debra Hare-Bey, a master braider and cosmetologist in Brooklyn, told The Associated Press that Pressley’s twist styles were a powerful message in the black community, and alopecia is a persistent problem.

“We’ve been discriminated against on the basis of our hair. It’s a very prideful thing to be able to wear your hair in its natural state and not have someone discriminate against you,” she said.

Hare-Bey pointed to a movement co-founded by Dove, called the CROWN Coalition (Creating a Respectful and Open World for Natural Hair), with the National Urban League, Color Of Change and the Western Center on Law and Poverty. The mission is to push for anti-hair discrimination legislation on the state level.

The coalition sponsored The CROWN Act, which has been signed into law in California, the first state to make hair discrimination illegal. The bill has recently passed both the New York Senate and the Assembly and has also been introduced in New Jersey. The bills, according to the coalition’s website, ensure that traits historically associated with race, such as hair texture and hairstyle, are protected from discrimination in the workplace and in K-12 public and charter schools.

Pressley, meanwhile, said she’s still trying to find her way forward in her alopecia journey and went public to free herself from the secret. She joked about her nicknames for her wigs, including one she dubbed “FLOTUS, because it feels very Michelle Obama to me.”

“I am making peace with alopecia,” she said. “I have not arrived there. … but I’m making progress every day.”