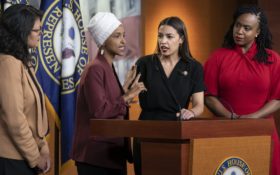 Omar and her husband, political consultant Tim Mynett, married in March and the two seemingly celebrated with a big injection of cash.

And that’s raised serious questions about just what the money is being used for.

Just last year in 2019, Omar received serious ethics complaints alleging that the payments to Mynett were used for travel expenses related to the supposed affair they had before their marriage. According to website influencewatch.org, Mynett’s estranged wife had questions about the payments too.

The recent reported payment is just icing on the cake, the last of a long string of payments that Omar, an ally of Rep. Alexandria Ocasio-Cortez, D-N.Y., sent her husband’s way.

And there’s perhaps another explanation as to why Omar is fueling Mynett’s firm: It’s reportedly struggling financially.

“Nearly broke,” she said of him.

Speculation has ensued that Omar was abusing payments just to put food on the table for Mynett and fund his lifestyle.

The huge windfall of cash, of course, is nothing new. Though Omar’s practices are technically within Federal Election Commission rules, the payments have raised alarm from multiple watchdog groups, many of which have complained that Omar is abusing her position of power to invoke nepotism.

Her actions are reminiscent of other politicians who have enriched themselves and their families over long periods of time. This could be only the beginning.

Attorney Richard W. Painter told the NYPost, “It should not be allowed. I think it’s a horrible idea to allow it, given the amount of money that goes into these campaigns from special interests.”

“We already have enough problems with gifts to campaigns as a quid pro quo for political action,” he said.

She’s dodging a 1960s law, Painter says, which makes it illegal to hire relatives in government jobs but that doesn’t include campaign appointments.

But, ultimately, the voters of Minnesota will have the last say on whether this behavior is acceptable.

And Omar’s campaign donors may be increasingly nervous about sending more cash her way.