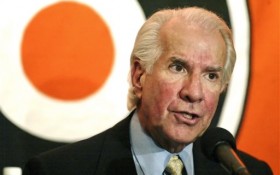 Ed Snider was weakened by cancer, the disease that kept him from his beloved Philadelphia Flyers.

General manager Ron Hextall went to Snider’s home in California in December before a scouting trip, watching what would be their last Flyers game together on TV.

The St. Louis Blues led 3-0 in the second period, souring the mood.

Snider high-fived Hextall, though, when the Flyers scored one goal, then two and three.

Once the Flyers scored the winner, Snider showed as much fight as one of his old Broad Street Bullies.

“He was in pain, a lot of pain,” Hextall said. “But when we scored that fourth goal, he got right out of his seat. I couldn’t believe it.”

Snider, the Philadelphia Flyers founder whose Bullies became the first expansion team to win the Stanley Cup, died Monday after a two-year battle with bladder cancer. He was 83.

“Despite his considerable business achievements and public profile, he was first and foremost a family man,” the Snider family said in a statement. “Unrivaled, however, was his love for the Philadelphia Flyers Hockey Club, the team he created 50 years ago and to which he remained fiercely devoted through his final days.”

With Snider ailing, the Flyers clinched a playoff spot Saturday and dedicated the playoff push to him. Philadelphia plays Washington in the first round.

Snider watched Lauren Hart sing “God Bless America” on FaceTime as the team’s longtime anthem singer held out her phone during her performance. She blew kisses after the song.

“He is the Philadelphia Flyers,” captain Claude Giroux said Monday.

Snider was arguably the most influential executive in Philadelphia sports. He was chairman of the 76ers, was once a part-owner of the Eagles and had a hand in founding both Comcast’s local sports channel and the city’s largest sports-talk radio station.

Snider, chairman of the Flyers’ parent company, Comcast-Spectacor, was elected to the Hockey Hall of Fame in 1988.

“Ed Snider was the soul and the spirit of the Flyers, who have reflected his competitiveness, his passion for hockey and his love for the fans,” NHL Commissioner Gary Bettman said.

Snider built his fortune with a record company and arrived in Philadelphia in 1964 as a part owner of the Philadelphia Eagles, serving as the team’s treasurer.

Upon hearing that the National Hockey League was going to expand from its original six teams to 12, Snider was awarded an expansion club in 1966. The Flyers played their first game in October 1967 in front of 7,800 people.

Snider was confident hockey would be a hit in blue-collar Philadelphia.

After being swept out of the playoffs in the first round in 1969, Snider directed his general manager to acquire bigger, tougher players.

Five seasons later, the Broad Street Bullies beat the Boston Bruins for the Stanley Cup. The Flyers repeated as champions in 1975 — the team’s last title.

“We were the best thing that happened to the National Hockey League,” former Flyers enforcer Dave “The Hammer” Schultz said. “Some might disagree. But we created a lot of excitement in the franchises that were existing then.”

Snider reveled in that excitement — and controversy — created by the Bullies at the ol’ Spectrum.

“When the officials made a bad call in my mind, everybody would look back and I’d be standing up screaming, so they’d all be standing up and screaming,” Snider said. “I had a great connection with the fans and I miss that tremendously.”

Snider assumed control of the Spectrum, the now-demolished home arena for the Flyers and Sixers, in 1971. Three years later, he established Spectacor, a management company that controlled the Flyers and Spectrum, where the team had enjoyed its most success.

Comcast-Spectacor owns about three-quarters of the Flyers while Snider held the minority share and had day-to-day control.

“We absolutely intend to continue to own the Flyers,” Comcast CEO Brian Roberts told The Associated Press. “Ed wanted nothing to change. Of course, everything changes. But we were ready for this.”

Spectacor went on to establish or buy other businesses, including Philadelphia-area cable channel Prism and WIP-AM. Snider’s company picked up the radio station around the time it was one of the first in the country to transition to an all-sports format.

He also developed what is now the Wells Fargo Center, which opened as the new home of the Flyers and Sixers in 1996. That same year, Snider merged Spectacor with Comcast Corp., bringing together the Flyers, Sixers, Philadelphia Phantoms of the American Hockey League, the Wachovia Center and Spectrum.

The company joined with the Philadelphia Phillies to form the regional sports channel Comcast SportsNet, and now runs arenas and stadiums around the country.

Under Snider, the Sixers drafted Allen Iverson and the team reached the NBA Finals in 2001. Comcast-Spectacor sold the team in 2011.

“I’ve adopted the Sixers and I love the Sixers. I really do,” Snider said when he owned the Sixers. “But in hockey, I started from scratch. We named it, we created it. It didn’t exist. Now it’s a worldwide emblem recognized everywhere. It’s my baby.”

Born in Washington, D.C., Snider grew up working with his father in the family’s grocery store. A graduate of the University of Maryland, Snider became a partner in the record company Edge Ltd. before joining the group who bought the Philadelphia Eagles. He sold his stake in 1967.

Snider started the Ed Snider Youth Hockey Foundation in 2005. The foundation promotes life skills and hockey through after-school, recreational, and other educational activities. Snider hockey programs are provided at no cost, focus on underserved Philadelphia boys and girls who otherwise would not have the opportunity to play.

“I really want it to be my legacy,” he said.

He is survived by his wife Lin and daughters Lindy, Tina and Sarena, sons Craig, Jay and Samuel, and several grandchildren. He was married three other times.