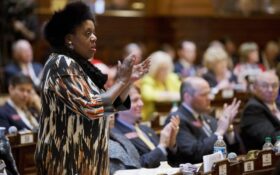 Seven candidates are facing off in Tuesday’s special election to become the short-term successor to the late U.S. Rep. John Lewis in Georgia.

The winner will fill those big shoes for only a little while. November’s general election will decide the full two-year congressional term, which begins in January.

None of the candidates in the special election are on the ballot for November, but all say the vote is still important, citing the symbolism of having someone occupying the 5th Congressional District seat as well as practical concerns about making sure the district has a voice in any action Congress might take on COVID-19 relief and other issues.

Independent Steven Muhammad and Libertarian Chase Oliver are also running in a district that covers parts of Fulton, DeKalb and Clayton counties.

If no one wins a majority Tuesday, a runoff will be held Dec. 1. The winner will serve only until early January.

Lewis died in July from pancreatic cancer after 17 terms in Congress. His death prompted an outpouring of public mourning, as one of the foremost leaders of the civil rights movement died during an upsurge in protest over police violence against Black people and racial inequality. Lewis’ long career in Congress was seen by some as a bridge between those eras, a theme Lewis explicitly sounded in a posthumous essay in which he discussed the Black Lives Matter movement.

Voters in November will choose a successor for the next term. Because Lewis had already won the primary for his seat, Democrats named Nikema Willams, a state senator and state Democratic Party chair, to take Lewis’ place after his death. She’s running against Republican Angela Stanton King.

Figures from Georgia’s secretary of state show more than 16,000 people cast ballots early for Tuesday’s election, with nearly three-quarters voting in person. There are about 630,000 registered voters in the district.

Sponsored: QUIZ: Which Alcohol Is Better For Your Health?

“Given all of the misinformation and confusion, the voters have no clue the special election is tomorrow,” she wrote in a text to The Associated Press.