Speaker Ryan bringing BIG changes to House… But are they good? - The Horn News 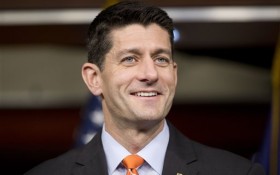 Late nights dealing with scores of amendments on the House floor.

An invitation extended to the famously staid Senate majority leader, Mitch McConnell of Kentucky, to appear at an open mic session.

A conversation so inclusive that “people were shocked,” according to one GOP lawmaker, Mike Conaway of Texas.

A week into his tenure, the new speaker looks determined to make good on promises of opening up the House of Representatives to participation from all lawmakers — perhaps especially those hardliners on the right who booted out his predecessor, John Boehner.

He is inviting lawmakers onto a new committee to weigh rules changes in the House. He’s encouraging their input into processing must-pass spending legislation on the floor, despite skepticism from the powerful House Appropriations Committee with time short before a Dec. 11 deadline to fund the government or risk a shutdown.

And a far-reaching transportation bill on the House floor this week involved votes on 126 amendments, including plenty from the hard-line crowd, though some were defeated and the House stayed in session until past 1 a.m. Thursday.

Said Rep. Matt Salmon of Arizona, a member of the hard-line Freedom Caucus: “Be careful what you wish for. But in this case a little hard work never killed anybody.”

“There’s a bounce in my step now,” said Rep. Phil Roe, R-Tenn. “People are excited, and they’re excited because Paul really did open the process up.”

Ryan, R-Wis., the 45-year-old former GOP vice presidential nominee and one of his party’s rising young stars, clearly starts out with a reservoir of good will from lawmakers eager to move on from years of dysfunction and fiscal crises. He himself voiced cautious optimism on Thursday, calling action on the highway bill “a good start, it’s a glimpse of how we should be doing the people’s business.”

At the same time he exercised his political capital to push an ally, Rep. Kevin Brady of Texas, to replace him as chairman of the tax-writing Ways and Means Committee. Passed over was Rep. Pat Tiberi of Ohio, who remarked that “When the speaker comes out for your opponent, it’s gonna matter.”

But it remains unclear how Ryan will fund the government by Dec. 11 without relying primarily on Democratic votes.

It’s also unclear how he handle another knock-down fight over Planned Parenthood, with some conservatives once again demanding to use must-pass spending bills to eliminate federal funding for the group in light of videos on handling of fetal tissue.

Ryan refused to offer a guarantee Thursday that the government will stay open, or say how the Planned Parenthood issue will be resolved.

“I’m not going to pre-determine the outcome of negotiations that have not even taken place yet,” Ryan said. He said he didn’t think Planned Parenthood “should get one red cent from the taxpayer,” but also noted that the House is moving against the group on various fronts.

At a closed-door GOP meeting Thursday Ryan sought input from the rank-and-file about moving forward on completing the 12 annual spending bills needed to fund the government. Half have already passed but the process stalled in a dispute about the confederate flag. Members of the Appropriations Committee have been planning to write a catch-all measure wrapping all the spending bills together, guided by overall budget numbers agreed to last week in a deal cut by Boehner.

In the House under Boehner, lawmakers might have been presented with the massive legislation at the 11th hour along with demands to pass it or get blamed for shutting down the government. Instead Ryan consulted with them, offering the opportunity to bring individual measures to the floor even as the Appropriations chairman, Hal Rogers of Kentucky, and other lawmakers voiced concerns about such an approach because of the short time remaining as well as the potential for fights on individual bills.

The issue remained unsettled as lawmakers remarked that an open and inclusive process might have its limits, a proposition certain to be tested time and again in months ahead.