Space cadet Clinton: We may have been visited by aliens - The Horn News 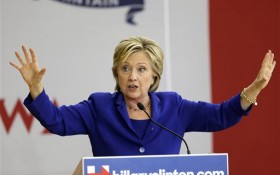 Democratic candidate Hillary Clinton offered a glimpse into what one of her key priorities would be as president.

And it’s out of this world — literally.

In a recent interview with New Hampshire’s Conway Daily Sun, Clinton offered a rambling reflection on everything from UFOs to whether the Earth had been visited by alien races.

Clinton promised to support efforts by UFO groups to get the government to disclose everything it knows about extraterrestrial encounters.

And then Clinton, who was once America’s top diplomat, dropped a bombshell by claiming that aliens may have already walked among us.

“I think we may have been (visited already),” she said. “We don’t know for sure.”

Clinton also promised to “get to the bottom” of what occurs at Area 51, a Nevada military installation that Clinton initially called “Area 54.”

Clinton’s campaign chairman John Podesta is a long-time UFO conspiracy theorist. And both Clinton and her husband, former President Bill Clinton, have made previous, public speculations about UFOs and the possibility of alien life visiting Earth.