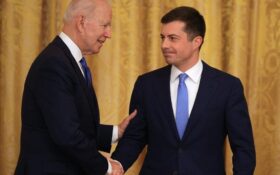 Several months before the holiday season, airlines had already been delaying their flights.

Many airlines had laid off their employees during the pandemic, and by the summer of 2022 they found themselves unable to meet historically normal demand for air travel.

The Biden administration promised to manage the problem… and then fell asleep at the wheel.

In September, Transportation Secretary Pete Buttigieg acknowledged all the delays and promised an improvement by Christmas.

“I think it’s going to get better by the holidays,” Buttigieg said on The Late Late Show in September. “We’re really pressing the airlines to deliver better service. So many people have been delayed, been canceled – it’s happened to me! Several times, this summer! And the fact is, they need to be ready to service the tickets they’re selling.”

Around that time, 38 state attorneys general had briefed Buttigieg about unresolved issues with air travel. Attorneys general of both parties had taken issue with lax oversight of the airline industry.

Yet, Buttigieg appears to have been blindsided by the meltdown of Southwest Airlines.

Buttigieg is currently negotiating with the airline executives in an attempt to provide compensation for delayed service. However, Buttigieg has yet to announce any immediate relief. All the while, thousands of travelers remain stranded without any line to Southwest customer service.

Some Democrats have defended Buttigieg, arguing that he can’t control the weather.

But at this point, Southwest is canceling flights due to a technology failure, not simply due to poor weather. The Dallas-based airline has become the only airline unable to recover from storm-related delays that began over the weekend when snow, ice and high winds raked portions of the country. The airline admitted that it has inadequate and outdated operations technology that can leave flight crews out of position when adverse weather strikes.

Southwest has dealt with similar issues before. In October 2021, the airline was reporting more delays than other, similar airlines, and it also attributed the delays to bugs in its traffic-control tech.

The airline continued to extract itself from sustained scheduling chaos Thursday, canceling another 2,350 flights after a winter storm overwhelmed its operations days ago.

As has been the case every day this week, the vast majority of flight cancelations nationwide, are Southwest flights.

There were 2,451 flights canceled before noon Thursday in the U.S., and 2,357 were Southwest routes, or about 58% of its entire schedule, according to the FlightAware tracking service.

The airline has warned that cancelations will continue for days.

The federal government is investigating what happened at Southwest with total cancelations soaring past 10,000 early in the week.

Southwest added a page to their website specifically for travelers who were stranded, but thousands of customers remain unable to reach the airline.