Socialist congressmember embarrasses herself in interview - The Horn News 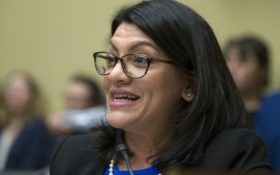 Rep. Rashida Tlaib, D-Mich., remains one of Congress’s four card-carrying member of the Democratic Socialists of America. Throughout her tenure, she’s become closely aligned with Rep. Alexandria Ocasio-Cortez, D-N.Y., and other far-left lawmakers.

On Monday, she interviewed with Axios reporter Jonathan Swan. She tried to answer questions about whether to abolish prisons… and she beclowned herself.

Swan pressed Tlaib on her support for the BREATHE Act.

“In 2020 you endorsed the BREATHE Act, which is a series of proposals to transform America’s criminal justice system and create ‘a roadmap for prison abolition.’ The BREATHE Act proposes emptying federal detention facilities in 10 years,” he said. “To what extent have you wrestled with any potential downsides with releasing into society every single person who’s currently in a federal prison?”

Tlaib responded, “Yeah. Again, I think that everyone’s like, “Oh, my God! We’re going to just release everybody?”

Swan fired back, “That’s what the b– that says!”

Later in the interview, Tlaib distanced herself from certain provisions of the proposal. However, she also refused to walk back the proposal’s demand for closing all prisons within 10 years.

At this stage, BREATHE Act remains a proposal, not a bill. Swan himself stopped short of calling it a “bill.”

The proposal was written by a non-government interest group called Movement for Black Lives, and it hasn’t been formally introduced in Congress yet.

However, it has won the support of some congressmembers. Tlaib spoke at the group’s unveiling ceremony for the proposal. “Our communities in the 13th and I are committed to fully engaging with this legislation seriously and with a sense of urgency,” she said at the ceremony, according to the Los Angeles Times.

In the past, Tlaib has confused messages about police reform. On Twitter, she has shifted her messages from abolishing the police to merely reallocating police funds.

Now, Tlaib is making the same kind of argument about prison reform.

It wasn't an accident. Policing in our country is inherently & intentionally racist.

Daunte Wright was met with aggression & violence. I am done with those who condone government funded murder.

No more policing, incarceration, and militarization. It can't be reformed.

When we say #DefundPolice, what we mean is people are dying and we need to invest in people's livelihoods instead.

This is systemic oppression in numbers. pic.twitter.com/oPe0GD3D6p