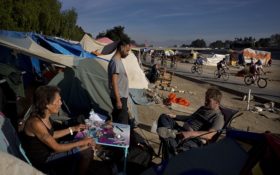 Known as “The Golden State,” California was supposed to be a left-wing dream state — and it was… until liberals ruined it.

These days, California is a lot like an old Hollywood film, just a golden appearance, and it’s one that’s now peeling away to expose the ugly rot beneath.

A shocking new video going viral on social media reveals the extent of the state’s massive homeless problem. This is the footage that Democrats never wanted getting out!

The viral footage from Daily Wire writer Ryan Saavedra shows a homeless encampment in Orange County, California, but it’s not just a little setup under a bridge with a half dozen or so hard-luck cases looking for shelter. Check it out–

This video was taken in Orange County, California recently.

This is the result of socialism and left-wing politics. pic.twitter.com/8BYWuXo0ly

The footage shows him riding through a seemingly endless line of tents and shanties that makes the old depression-era Hoovervilles look like a luxury condo complex.

That’s not the only camp in the area, either.

In Anaheim, also in Orange County, police recently cleared out a camp with between 500 and 1,000 homeless people just outside Angel Stadium, and a stone’s throw from Disneyland.

“This is the result of socialism and left-wing politics,” Saavedra wrote, and he’s not wrong.

Democrats can do whatever they want in California, where they control pretty much the entire state government. They have plenty of money to do it with, too, as the state is notorious for having the highest personal income tax rate in the nation.

Yet with all that power… and all that wealth… that state is STILL home to incredible poverty due to its liberal and flat-out socialist policies, which leads to tremendous income inequality, poverty and the massive homelessness seen in the video.

California is now home to more homeless people than any other state.

“We’re seeing a real significant increase and much of the rest of the country is not,” Ben Metcalf, the director of the state’s Department of Housing and Community Development, told the New York Times in December. “We’re all doing the same things, but here the rent is too damn high. We’ve seen an incredible increase in the cost of housing.”

One in four homeless people in the nation – more than 115,000 – are living in California, and many more are finding rent so unaffordable that they could soon join them.

Orange County, where that dramatic footage was filmed, is one of the top 100 wealthiest counties in the nation, yet it also has some of the highest rates of homelessness.

A little further south, the once-beautiful city of San Diego is now scrubbing its sidewalks with bleach because of the rapid spread of hepatitis due to all the homeless people living on the streets.

In the Bay Area, one of the most liberal regions in the nation, the homeless problem is so bad that a United Nations expert DENOUNCED the conditions in Oakland.

Los Angeles residents recently passed a bond measure to collect $1.2 billion to help the homeless, including building 10,000 housing units for the homeless over 10 years.

That’s a lot of money, and a lot of units.

But it’s not even close to being enough.

“That’s 1,000 units a year, but we know from data that you have way more than 1,000 people coming through the front door,” Philip Mangano, former homeless czar for President George W. Bush and chief executive of the American Round Table to Abolish Homelessness, told the Los Angeles times. “So you’re not even bailing a leaking boat.”

That might be the best analogy of all for the progressive dream-state: a leaking boat.

And like all leaking boats, this one is now in danger of sinking.