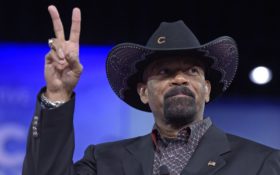 Former Milwaukee County Sheriff David Clarke did not violate a man’s free speech with Facebook posts after detaining him at an airport last year for shaking his head at Clarke while boarding a flight, a federal jury concluded Monday night.

In a civil lawsuit against Clarke, Daniel Black argued he received hateful messages and was fearful after Clarke called him a “snowflake” online and said Black “wouldn’t be around to whine” if the then-sheriff really wanted to harass him. Clarke made the comment after Black complained to the county that the sheriff had his deputies detain and question him for 15 minutes after he got off the plane in Milwaukee.

Black said he shook his head at Clarke last January on the flight from Dallas to Milwaukee because Clarke was wearing Cowboys gear when they were playing the Green Bay Packers in the playoffs.

Black at one point became teary-eyed and weepy while testifying Monday, saying he would never file another complaint against an elected official because the incident left him so rattled. He said he sued last year because he needed “someone to say this is wrong.”

Although Black was not arrested or cited, his attorneys argued that Clarke’s actions — particularly his social media taunts — were retaliatory and threatening enough to silence criticism of the sheriff. A court of law decided they were wrong.

“I felt guilty, I felt scared, that I had a target on my back,” Black testified, recalling one post in particular on the sheriff’s official Facebook site.

Clarke wrote on Facebook: “Cheer up, snowflake … if Sheriff Clarke were to really harass you, you wouldn’t be around to whine about it.”

Black’s attorney, Anne Sulton, showed jurors an email from Clarke staffer Fran McLaughlin expressing concern about the post, telling the sheriff it was “perceived as a threat, and I don’t think it should be on our agency page.” Clarke responded by saying, “It stays.”

Clarke was not in court Monday. His attorneys said Black did television interviews after the encounter and didn’t appear scared.

“Far from being chilled, he was encouraged and he enjoyed it,” attorney Charles Bohl said during opening statements, describing the case as “an unfriendly internet spat between two people who apparently don’t like each other very much.”

In his closing arguments, Bohl told jurors that Black’s TV interviews and social media posts about the incident showed that Clarke’s comments did not stop Black from exercising his free speech rights “abundantly” and that “he got his 15 minutes of fame.”

Black wanted jurors to award him a compensation amount of their choosing for emotional distress and other damages, as well as attorneys’ fees.

Proof that liberals want nothing more than attention and money for their childish actions.