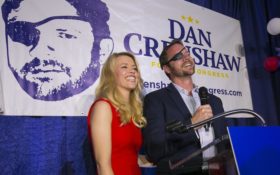 A former Navy SEAL has been elected to the U.S. House three days after “Saturday Night Live” mocked the eye patch he wears because he was badly wounded in combat.

From the podium Tuesday night after his election win, Crenshaw took aim at SNL comic Pete Davidson by saying, Americans “are not a people that shatter at the first sign of offense.”

Crenshaw, who wears an eye patch, lost his right eye after being seriously injured by an IED during his third tour in Afghanistan as a Navy SEAL.

Adding insult to injury — Davidson continued on to say, “I’m sorry, I know he lost his eye in war or whatever.”

Crenshaw tweeted Sunday that he hoped SNL “recognizes that vets don’t deserve to see their wounds used as punchlines for bad jokes.”

In his speech Tuesday night, Crenshaw elaborated on the heartache and pain that resulted from his injury. “(When) my wife Tara got the phone call that I’d been seriously injured, and I may never actually lay eyes on her again, she wasn’t alone,” he said. “Friends and teammates were with her. This life, this purpose, this American spirit that we hold dear, we are not alone, we do it together.”

Following his speech, Crenshaw touched on the SNL incident explaining that, “SEALs don’t get offended. That’s just not what we do.”

He added, “That doesn’t mean it wasn’t offensive, but let’s stop demanding apologies and firings of people. Let’s just… demand that comedy actually be funny, but let’s be good people.”

Crenshaw has stated that he will not demand an apology from Davidson, nor NBC. Instead, the former Navy SEAL has requested that SNL donates money to veterans.

“There’s a lot of veterans that really need help, and frankly, this kind of thing is offensive to them,” Crenshaw explained. “They feel laughed at.”