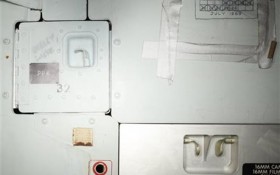 They are bits of space graffiti hidden from the public for decades: a crude calendar, scrawled lunar coordinates and markings warning of a locker containing “smelly waste.”

Apollo 11 astronauts left those scribbles inside the spacecraft that took them on their historic mission to the moon in 1969, but now the public will get to see them for the first time.

National Air and Space Museum officials presented a preview Thursday of a virtual 3-D model that will allow the public a look inside the car-sized Apollo 11 command module. No longer will the public have to try to peer inside through one of the capsule’s small windows or hatch.

The new model will allow anyone to examine the craft’s controls and see writing left by its three astronauts: Neil Armstrong, Buzz Aldrin and Michael Collins. (Aldrin says he’s pretty sure the calendar was Collins’ handiwork.)

Some of the markings left by the astronauts have to do with maneuvers they had to make to reach the moon, information it was easier to have written near the craft’s instruments. Others writings are less technical: “launch day urine bags” reads an inscription on one locker. On another: “smelly waste.”

“They just wanted to warn themselves that this is probably a locker that they should probably leave closed until after the mission was over,” said Allan Needell, a curator of space history at the Smithsonian who oversees Apollo artifacts.

The Apollo 11 command module, called “Columbia,” has been one of the star attractions at the National Air and Space Museum since its opening in 1976. But climbing inside has never been allowed. Even curators have been reluctant to go inside and risk damaging it.

The model expected to be available online this summer will let the public maneuver around the craft themselves and even print their own 3-D model of it. Eventually, a virtual reality experience will let visitors feel like they’re sitting inside the capsule. To make the model, experts spent two weeks scanning the inside and outside of the craft with lasers. They also took thousands of pictures.

Needell, who has overseen study on the command module for almost 20 years, says even he saw new things during the model’s creation. One piece of astronaut graffiti curators found written on a wall was a crude calendar of July 1969. It begins on the day the craft launched from Florida’s Cape Canaveral, July 16, 1969, and ends with the day the craft returned to Earth, July 24, the only day that is not crossed off. Needell says that in space, the astronauts wouldn’t have sunrise and sunset to keep track of the day, so the calendar would have helped.

Needell said he called Apollo 11’s two living astronauts, 85-year-old Michael Collins and 86-year-old Buzz Aldrin, to ask about the writings. Aldrin felt the calendar “sounds like something Mike would have done,” but it is still “a puzzle,” Needell said.

It was Collins who was alone in “Columbia” while Aldrin and Neil Armstrong, who died in 2012, descended to the moon’s surface. There’s nothing special written on July 20 — the day Armstrong became the first man on the moon. On the capsule’s calendar, it’s just another day that’s crossed out.