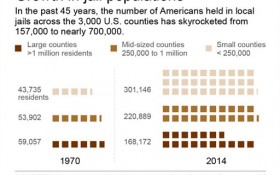 While big-city jails get most of the attention, lockups in small and medium-sized counties have actually driven the overall explosion in the U.S. inmate population, according to a new analysis of 45 years of jail statistics.

Exactly what’s behind that trend is not clear but experts say a range of factors likely contribute, from law enforcement’s increased use of summonses and traffic tickets to the closing of state mental hospitals in that time.

Unlike state prisons that hold inmates doing lengthy terms, local jails and county lockups are generally used to house pretrial detainees or those who have been sentenced to serve stints of a year or less for relatively minor crimes.

Jail use continues to rise though crime rates have declined since peaking in 1991, the analysis shows.

To give local corrections officials and sheriffs better information about jail trends over time, Vera drew on federal statistics to create an online tool that maps a range of data for all of the roughly 3,000 county lockups. That will allow officials to compare their jail incarceration rates to similarly-situated counties based on total population, median income and arrest rates.

The push for more information comes as advocacy groups, federal prosecutors and others are forcing counties across the country to reform their local criminal justice systems to make them fairer — and cut ever increasing costs dedicated to running decades-old lockups that are often overcrowded.

The sheriff in Oklahoma City for example, wants to build a new $360 million jail to replace the current nearly 3,000-inmate jail that the U.S. Justice Department cited for unconstitutional conditions in 2008. But business leaders and others have opposed the proposal, arguing officials should instead study policy approaches that might lock up fewer people and better serve those with mental illnesses.

A parallel phenomenon has played out at the similarly-sized jail in Marion County, Indiana, where advocates and others in Indianapolis fought back efforts to expand inmate beds, instead asking local officials to examine what’s driving jail growth.

“People don’t think about the jail most of the time until these moments when the question is: Do we build another one?” said Fishman. “Then the question is, Wait a minute, how are we using our jails in the first place?”