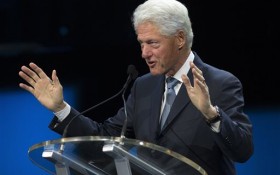 Remember when the Monica Lewinsky scandal was just a “vast right-wing conspiracy?”

Nearly 20 years later, it doesn’t look like the Clintons have gotten any better at taking responsibility for their actions.

Even as federal investigators begin to close in on former Secretary of State Hillary Clinton’s potentially illegal email practices, former President Bill Clinton is saying it’s the Republicans and the media’s fault that there is controversy surrounding his wife.

On Friday, the Obama administration discovered a chain of emails that Hillary Rodham Clinton failed to turn over when she provided what she said was the full record of her work-related correspondence as secretary of state, officials told The Associated Press. Their existence challenges her claim that she has handed over the entirety of her work emails from the account.

Bill Clinton likened the email controversy to questions over the Whitewater land deal that he faced during his 1992 presidential campaign, a scandal he continues to insist was not his fault.

Saying the furor over the private email server was more politics than substance, Clinton also argued that his wife will bounce back from a decline in the polls. The former president added that the news media also played an inappropriate role in his wife’s troubles.

“You know, at the beginning of the year, she was the most admired person in public life,” Clinton said. “What happened?”

Bill Clinton is considered one of the Democratic party’s most effective messengers. But as he showed in 2008, with remarks about then-Illinois Sen. Barack Obama that angered black voters in South Carolina, he can also be an undisciplined campaigner.

“I love my husband, and you know, he does get upset when I am attacked,” Hillary Clinton said Sunday in an interview with NBC’s “Meet The Press.”

Republicans have raised questions about thousands of emails that she has deleted on grounds that they were private in nature, as well as other messages that have surfaced independently of Hillary Clinton and the State Department.