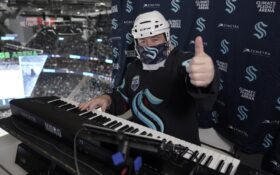 It started with an unsolicited email that landed in the inbox of the game presentation executives for the Seattle Kraken.

The name Rod Masters didn’t immediately resonate with Jonny Greco and Lamont Buford, who are in charge of overseeing entertainment and game production for the expansion franchise, though they would soon make a connection.

“I remember (Lamont) looking at me … and he’s like, ‘The dude from ‘Slap Shot’ just sent me an email,’” Greco recalled. “And I’m like, ‘What are you talking about? What dude?’”

That dude would be Masters, and if the name still doesn’t ring a bell, that’s fine. Just know he may be the most famous organist to ever appear on the big screen in a sports movie, and now nearly a half-century after he made a lasting impression in “Slap Shot,” Masters is the first organist for the Kraken.

His name never appeared in the credits of the iconic 1977 movie starring Paul Newman. But anyone who’s seen the movie knows Masters as the organist plunked in the head by a wayward puck and abruptly asked by Newman’s character Reggie Dunlop to never play “Lady of Spain” ever again.

More than 40 years later, he’s now part of the fraternity of organists around the NHL, a 68-year-old living out a dream, even for someone who has worked as a professional musician all over North America.

“I love playing for the people and they seem to be loving it. It’s just the best job I could ever even dreamed that I would have,” Masters said. “I had retired and then I thought just for the heck of it I’ll email them. … I would think this a great job for any musician.”

Organ or keyboard music is synonymous with hockey. It was even part of the soundtrack of the Beijing Olympics during stoppages in play.

Of the 32 NHL teams, only six — Philadelphia, Carolina, Dallas, Arizona, Vegas and Edmonton — don’t have an organist playing during games. Vegas, the last team to join the league before Seattle, didn’t have an organist in its first year, but tried it in Year 2. With all the other entertainment that went into the game production, the organ sound didn’t fit the soundtrack of Las Vegas.

“I don’t think we set up the people that we had in the mix for great success, but it also just didn’t kind of feel right,” said Greco, who along with Buford oversaw entertainment and game presentation for the Golden Knights before joining the Kraken. “The train was on the tracks for a lot of the Vegas elements and that just felt a little obtuse.”

In the midst of starting the franchise in Seattle, there were thousands of boxes for the entertainment staff to check. One that remained unmarked when the season began was in-house organist.

But Masters’ email offering his services lingered as a reminder. If the Kraken wanted that organ sound reverberating through Climate Pledge Arena, someone was interested.

One problem: While he played a hockey organist in the movie, Masters had never done that kind of performing in his long musical career. At the time the movie was being filmed in Johnstown, Pennsylvania, Masters was playing regularly at the Sheraton Hotel where the cast and crew were staying.

Most of his music background was in Top 40s, pop, disco and country. Not little vignettes to play in between slashes, trips and goals.

“I’m new at this. That’s why I’m doing all this research all of a sudden,” Masters said. “I never knew that I would ever get a job like this.”

One of the peers Masters has reached out to for advice is Jeremy Boyer, who has been the organist for the St. Louis Blues for 15 years. Boyer is a star, performing primarily for the Blues, but also the St. Louis Cardinals at times.

He has amassed a massive social media following with his skill taking popular songs and making them rock via the organ.

“I think you have to be a little bit of a fan. You have to enjoy the game and your music has to reflect what is happening in the game, too,” Boyer said. “I feel like I’m lucky, I’m out in the crowd so I really get the vibes of everybody that’s around me and I try to take that energy and funnel it into my music.”

Coincidentally, Masters’ debut with the Kraken on Jan. 1 came against Vancouver, whose coach, Bruce Boudreau, also appeared as an uncredited extra in the movie.

Since that debut against the Canucks, Masters has grown into his role and the team is learning ways to showcase him more. For instance, Masters tries to lighten the mood by playing after opponents score, which has been far more than the last-place Kraken were hoping this season.

Masters is also thinking ahead, with the idea of having a true organ in place for next season rather than the keyboards he’s been using in this first stint.

“I think people just thought it was really a good fit for where we were headed,” Greco said. “And it was just a super unique story we got to tell, and a character we got to add to our show that only the Seattle Kraken get to own.”