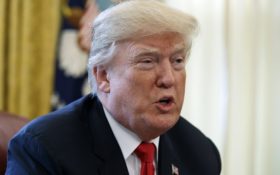 After eight years of a loving relationship with former President Barack Obama, the mainstream media grew fat and happy.

Ever since President Donald Trump took charge and started making moves, they’ve been scrambling to catch up.

At a historic meeting with French President Emmanuel Macron in the Oval Office, Trump and his European counterpart fielded questions about the special relationship between France and the United States, the controversial Iranian nuclear deal, and international trade.

When ABC News’ John Karl tried to bring up the so-called “witch hunt” by Robert Mueller’s special counsel — which critics have noted has nothing to do with Marcon’s visit — Trump wasn’t interested in playing along.

Referencing the FBI raid on Trump’s lawyer, Michael Cohen, Karl asked: “Are you considering a pardon for Michael Cohen?”

Trump ripped the inquiry into the so-called witch hunt. The president shook his head, pointed at Karl, and then said simply, “Stupid question.”

Marcon smiled in disbelief as Trump turned to the rest of the room and asked, “Go ahead, are there… anybody else, please?”

You can see the moment here —

LOL: Watch Macron's face after Trump calls a reporter out for a "stupid question." pic.twitter.com/UrSMNJuo42

Ouch, that has got to hurt.