Six men compete for $7.6 million in a card game - The Horn News 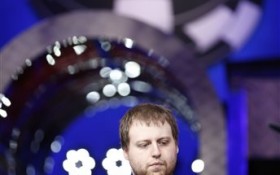 The man to beat at the World Series of Poker Main Event had an unrivaled tower of chips by night’s end and luck on his side.

Joe McKeehen of Pennsylvania held an enormous lead going into the final three-day face-off with eight other players. Going into day two, he held 57 percent of all the chips on the table with hopes of having them all by day three.

The chance for one player to win $7.6 million and poker’s most esteemed title continues today.

Three players lost that chance Sunday during some six hours of gameplay, each of their poker dreams vanquished in head-to-head battle with McKeehen.

Players still chasing the prize, and McKeehen’s chip lead include — in order of their standing — Ofer Zvi Stern from Israel, Neil Blumenfield from San Francisco, Max Steinberg from Las Vegas and Joshua Beckley and Thomas Cannuli, both from New Jersey.

Each brought cheering sections wearing matching t-shirts or in Steinberg’s case, tailored suites, and in Blumenfield’s corner, fedora-wearing fans, both trademark styles for the two players.

They all last matched wits in July for the series’ Main Event and returned to the Rio All-Suites casino-hotel in Las Vegas with their remaining chips for the final matchup. Each outlasted 6,420 entrants paying $10,000 each for the chance to win the no limit Texas Hold ’em event.

No limit Texas Hold ’em involves each player getting two cards unseen by the rest of the table and five community cards, the first three on the “flop”, the fourth on the “turn,” the fifth on the “river,” with betting between each.

For the last player eliminated Sunday night, 72-year-old Pierre Neuville from Belgium, his World Series of Poker end was hardly his poker playing finale, with his eyes already set on the next tournament.

Patrick Chan from New York was out of the running in less than five minutes, during the second-hand of the night, and Italy’s Federico Butteroni departed about three hours later.

“I’m just so happy for this experience and for the beautiful dream the World Series of Poker let me dream,” Butteroni said shortly after being eliminated. “Now I am just in shock. I finished 8th out of 6,420 people.”