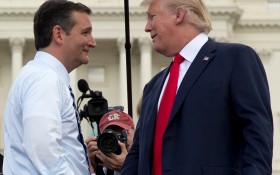 It’s a brawl that has been weeks in the making. Now, Texas senator Ted Cruz and brash billionaire Donald Trump are set to lock horns on national television in Thursday’s GOP debate.

The two are in a fierce battle for primacy in Iowa, the first state to vote on the GOP nomination. And a series of fiery exchanges between them threatens to suck the air out of the sails of their other five rivals, who are joining the front-runners on the stage in South Carolina.

The candidates — Trump, Cruz, Marco Rubio, Ben Carson, Chris Christie, Jeb Bush and John Kasich — are expected to discuss matters of security, the nation’s economy, health care and more as they jockey for positioning in Iowa, which votes Feb. 1, and New Hampshire, Feb. 9.

Here are six things to watch for at the debate sponsored by Fox Business at 9 p.m. EST:

#1 – Trump and the citizenship question

The so-called “bromance” long over, Trump and Cruz are competing fiercely for conservative voters in Iowa. Look for more of the yes/no fight over whether Cruz’s eligibility to be president is in question, given his birth in Canada. Cruz was born to an American mother, and most legal scholars agree that makes him a “natural born citizen” — a requirement by the Constitution for people to be U.S. president. Trump insists that’s not been settled and says Democrats are likely to file a lawsuit over the matter should the GOP nominate Cruz. The Texas senator, a constitutional expert, says there’s little danger of that because the law is clear.

After saying for months that he didn’t want to get into a “cage match” with Trump, Cruz on Tuesday tried out a series of attacks on the billionaire developer, casting him as a less-than-pure conservative who is poorly prepared for the challenges facing the U.S. from abroad. It’s unclear whether the Texas senator will keep up the barrage — or back off and refuse to engage Trump before a national audience. Cruz has given him a pass before.

#3 – Bush presents himself as an alternative

Look for the former Florida governor, fading from the front of the pack, to cast himself as the only Republican presidential hopeful brave enough to go after Trump. In recent days, he’s criticized the real estate developer on taxes, guns and health care, saying Trump would not apply conservative principles to the nation’s problems. Bush also is expected to highlight his multi-point plan to fight Islamic State militants.

Given Cruz’s rise in Iowa and New Hampshire polls, look for more focused attacks on him. Rubio is a likely agitator, given the rivalry that’s sprung up between the two over what to do about the 11 million people in the country illegally, as well as how to tighten the nation’s borders. Both are sons of Cuban-born fathers. The confrontation, widely expected in the last debate, didn’t happen.

Such a confrontation could benefit Rubio, who presents himself as an appealing alternative to Trump and Cruz for the wide swath of undecided Republican voters in Iowa. The national stage would give him a platform to show off his foreign policy and national security expertise and appeal to more moderate Republicans in New Hampshire and the GOP establishment nationally.

Expect the bombastic New Jersey governor to try to stay out of the bickering and make the case that he gets Americans’ concerns over security and the economy. He’s focused on a good showing in New Hampshire.