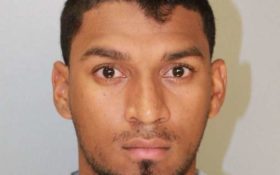 Major League Baseball indefinitely suspended Houston Astros minor leaguer Danry Vasquez in August of 2016 following his arrest on suspicion of assault family violence, and the outfielder was released by the team.

On Tuesday, a news channel in Corpus Christi, Texas released a video that reportedly shows that disturbing incident between Vasquez and his girlfriend at the time.

Kris TV reports, “The video, received through an open records request, shows the assault which happened at Whataburger Field, back on August 2nd, 2016.”

Warning: This is a graphic video —

The video shows a man walking into a stairwell and suddenly striking the woman, hitting her in the face.

A Corpus Christi police spokesman said Tuesday the then 22-year-old was arrested on a warrant Aug. 4, 2016. That was two days after he allegedly struck his girlfriend multiple times.

As the video continues, the woman is shown being hit twice, her hair was then pulled. As the two walk down the stairs, the woman was struck for a third time.

A native of Venezuela, Vasquez  had the potential to be a major league star. Fox News reports, “He signed a contract with a $1.2 million signing bonus with the Detroit Tigers when he was 16 years old before being traded to the Astros.”

On Wednesday morning, his current minor league team announced they would release the outfielder.

BARNSTORMERS RELEASE DANRY VASQUEZ The Lancaster Barnstormers have released outfielder Danry Vasquez, it has been…

Following the 2016 incident, Vasquez was arrested and charged with a misdemeanor. His case has been dismissed after he completed a plea deal for which he paid a fine and attended classes.