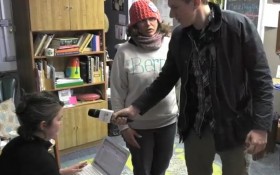 And it puts the campaign of Vermont Sen. Bernie Sanders under serious scrutiny after his campaign staff — on multiple occasions — helped undercover activists, posing as wanna-be voters who live out-of-state, cast what appears to be illegal votes.

In the video, just released by conservative journalist James O’Keefe’s Project Veritas, there are multiple examples of both Sanders’ campaign staff as well as other Democratic poll workers helping to fabricate where the journalists call home.

In one example, one of the journalists seemingly asks a poll worker how he could still vote in New Hampshire, even if he doesn’t live there and is just in town staying with a friend.

“If you want to vote today, you might want to tell them that you’re staying with your friend and you’re here indefinitely, which sounds like it’s true,” the worker explains.

“Okay, yeah, not 100 percent true, but I understand,” the activist replies.

“Right, but you’re here indefinitely, and you have your address at your friend’s house,” the poll worker says. “And then you’d be able to vote.”

In another exchange, a Sanders campaign staffer explains why she believes the New Hampshire voting laws are so easily circumvented, saying that voting fraud is, “incredibly easy,” and that “they make all these lax laws, surrounding voting, so people can, like, take advantage of it.”

The New Hampshire attorney general’s office has announced they’re investigating the content of the video, which you can see for yourself here: