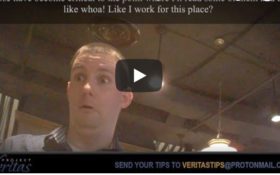 For decades, conservative voters have complained that The Washington Post and mainstream media outlets are unfairly biased.

But even for the hardened cynic, the toxic insanity that has taken over the media since President Donald Trump was elected is shocking. How bad has it gotten?

After The Washington Post revealed Monday it had discovered an undercover operation at the newspaper, the mainstream media blasted O’Keefe’s organization. The Atlantic called him “irrelevant.” CNN Politics labeled him as a scheming anti-media operative.

O’Keefe’s response? He simply released the footage he had — with the promise that more was to come.

“Following months of undercover work within The Washington Post, our investigative journalist embedded within the publication had their cover blown,” O’Keefe wrote in on Twitter. “This is how undercover work goes. This isn’t the first time that has happened, and it won’t be the last time.”

In the footage — the first of a series O’Keefe promises will uncover how deep the media’s bias goes — The Washington Post’s Director of Products is seen on camera admitting his paper focuses on sensationalized Trump stories for cheap cash.

“If Trump just disappeared tomorrow, our traffic would drop by thirty percent!” he says.

Investigators caught a New York Times consultant admitting that everyone at the paper “hates Trump.”

A Washington Post senior reporter admits his paper’s editorial section is knowingly biased against the president, and that CNN is guilty of being the most anti-Trump of all the mainstream media sources.

And a senior manager at The Post is seen admitting that Amazon’s Jeff Bezos, the paper’s owner and outspoken Trump opponent, has direct influence on the paper’s direction and coverage.

It’s shocking to see… but the footage is undeniable.