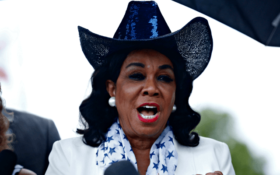 Rep. Frederica Wilson, D-F.L., is tired of conservatives making fun of her and her colleagues on the internet — and she’s demanding that citizens who exercise their First Amendment rights be jailed if they mock Congress.

At a rally for illegal immigrants on Tuesday outside of the Homestead Temporary Shelter for Unaccompanied Children in Florida, Wilson made explosive comments about restricting American’s freedom of speech.

“Those people who are online making fun of members of Congress are a disgrace!” Wilson said. “And there is no need for anyone to think that it is [acceptable].”

“It is against the law!” she falsely stated. “It’s a shame on this United States of America.”

The comments were in response to a controversial Facebook group that includes Customs and Border Patrol agents. The agents were allegedly mocking and posting edited, explicit content about members of Congress that call for open borders.

According to ProPublica’s piece headlined, “Inside the Secret Border Patrol Facebook Group Where Agents Joke About Migrant Deaths and Post Sexist Memes”, border patrol agents were posting graphic satire about Rep. Alexandria Ocasio-Cortez and other members of the Congressional Hispanic Caucus before their visit Monday to detention facilities.

The Associated Press reported that the National Border Patrol Council, an early supporter of Trump’s presidential bid whose leader, Brandon Judd, advises the White House on immigration, said Monday that it “strongly condemns” the posts and that they do a “great disservice to all Border Patrol agents, the overwhelming majority of whom perform their duties honorably.”

This isn’t the first controversial statements by Wilson since President Donald Trump took office, of course.

“The congresswoman also rose to prominence in 2017 after she leaked the conversation Trump had with the Gold Star widow whose husband died in Niger and criticized the president for being ‘so insensitive’ after he said that the slain soldier ‘knew what he signed up for…but when it happens, it hurts anyway,'” Fox News reported.

You can watch her attack on the First Amendment here —

FLASHBACK: Watch just 0:25 of this video on Trump, it’s all we ask