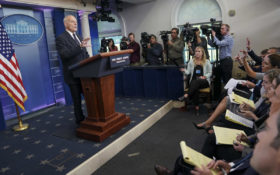 Johnson died in a terrorist attack on Oct. 4th in Niger.

During a call to Johnson’s widow on Tuesday, Rep. Frederica Wilson of Florida made claims that President Trump was disrespectful and non-empathetic.

Kelly, during his unannounced appearance at the White House, criticized the Democratic congressman for comments she said Trump made in his condolence call to the pregnant widow of the Green Beret.

Kelly, a retired four-star general whose son was killed while serving in Afghanistan, called Rep. Frederica Wilson of Florida an “empty barrel” who “makes noise,” but he did not deny the lawmaker’s account of the phone call, as the president had this week.

“I was stunned when I came to work yesterday morning, and brokenhearted at what I saw a member of Congress doing,” Kelly said. “Absolutely stuns me. And I thought at least that was sacred.”

The raw and sincere message that Kelly aimed to get across was how respect  lost respect for military service, women, authority and more by Congresswoman Wilson making the President’s private call a public scandal.

General Kelly personally absolved Trump by stating “If you’re not in the family, if you’ve never worn the uniform, if you’ve never been in combat, you can’t even imagine how to make that call,” Kelly said. “I think he very bravely does make those calls.”

President Trump has rejected all claims that he was disrespectful to any military families.

During the briefing, Kelly touched on Trump’s remarks regarding Obama never reaching out to Kelly or his family after the passing on his son. Kelly confirmed that Obama had not called him, but he made clear “that was not a criticism.”

“That’s not a negative thing,” he said. “I don’t believe all presidents call. I believe they all write.”

To make it clear, Kelly reported that when Trump took office, he actually had advised the President to not make calls to the military families:  “I said to him, ‘Sir there’s nothing you can do to lighten the burden on these families.’”

President Trump did not listen to Kelly’s suggestions, instead he asked the chief of staff for advice of what he should say to the families. Kelly explained that he responded with the guidance give to him after the passing of his son, by General Joseph Dunford, now chairman of the Joint Chiefs of Staff, “[he] was doing exactly what he wanted to do when he was killed. He knew what the possibilities were because we’re at war.”

And Kelly added that Dunford told him that “when he died, he was surrounded by the best men on this earth, his friends. That’s what the president tried to say to four families the other day.”

The speech given by General Kelly was a rebuke to Congresswoman Wilson’s comments on Trump’s call to the Johnson family.

A spokeswoman said Thursday that Wilson stood by her earlier comments. The congresswoman herself, asked by WSVN-TV in Florida about Kelly’s remarks, replied only indirectly.

“Let me tell you what my mother told me when I was little,” Wilson said. “She said, ‘The dog can bark at the moon all night long, but it doesn’t become an issue until the moon barks back.’”

The White House chief of staff explained that her remarks upset him very much and that he went to take a walk “among the finest men and women on Earth” in a 90-minute visit to nearby Arlington National Cemetery, among the graves of service members, including some who died under his command.

Following Kelly’s speech, he took to reporters for their questions, but first he asked any of them were Gold Star parents or siblings. When no reporter raised their hand, Kelly explained that he would only be taking from those who knew a Gold Star family.