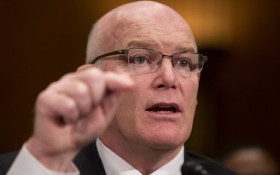 The Secret Service’s list of offenses may have moved from unprofessional shenanigans to just plain blackmail.

This time, the scandal doesn’t involve booze, women or security breaches for the agency. It involves attempts by the Secret Service to send a clear and frightening message to Congress — investigate us at your own risk.

The Secret Service is accused of accessing and leaking to the media an unsuccessful job application for Utah Congressman Jason Chaffetz, who is chairman of the House Oversight and Government Affairs Committee, after he began investigating the agency.

Employees of the Secret Service accessed Chaffetz’s 2003 application for a job there starting 18 minutes after the beginning of a congressional hearing in March about the latest scandal involving drunken behavior by senior agents. At least 45 employees viewed the file.

One week later, Assistant Director Ed Lowery suggested leaking embarrassing information about Chaffetz in retaliation for aggressive investigations by Chaffetz’s committee into a series of agency missteps and scandals, a Homeland Security report said. Days later, on April 2, the information about Chaffetz unsuccessfully applying for a job at the Secret Service was published by The Daily Beast.

“Some information that he might find embarrassing needs to get out. Just to be fair,” Lowery wrote March 31 in an email to fellow Assistant Director Faron Paramore.

During the investigation Chaffetz’s office learned that a photo of him from a committee hearing was posted in at least one Secret Service office. Across the top and bottom of the photo was written: GOT BQA BY THE SERVICE IN 2003 BECAME A CONGRESSMAN IN 2009.

The investigation found that 18 supervisors or members of the agency’s senior executive service knew or should have known that employees had improperly accessed Chaffetz’s job application, but only one person attempted to inform Secret Service Director Joseph Clancy. The inspector general said that under U.S. law and Secret Service rules, employees were required to report such behavior to supervisors.

The actions by the employees could represent criminal violations under the U.S. Privacy Act.

“It’s intimidating,” Chaffetz said. “It’s what it was supposed to be.”

He said in a statement Wednesday that “those responsible should be held accountable.”

President Barack Obama formally appointed Clancy early this year despite recommendations from an independent review panel that the agency needed a leader from the outside.