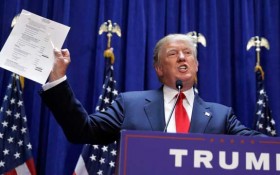 Donald Trump’s polling numbers are getting better and better. A new CNN/ORC poll released today had a new, shocking fact – not only have Trump’s numbers gone up (according to the poll, he’s now at 24% among GOP voters), but his negatives have gone down. And according to the poll, he’s now leading every other Republican candidate on every single issue.

If his numbers continue to grow at this pace, he could defy mainstream media’s initial dismissal and win it all, a fact that has his fellow GOP presidential candidates scrambling.

Trump has recently divided his Republican rivals anew with his call to rewrite the Constitution to crack down on millions of immigrants living in the U.S. illegally, and to force Mexico to pay for a better border fence. Scott Walker embraced some of the plan Monday, but other contenders, such as Chris Christie and Carly Fiorina, dismissed elements as unworkable.

Trump’s immigration proposal, his first formal policy plan since announcing his candidacy in June, won praise Monday from the GOP’s conservative tea partyers, some of whom favor changing the Constitution to reverse the “birthright citizenship” guaranteed to anyone born in the United States, no matter the status of their parents.

Trump leads his Republican rivals in national polls, and his proposal quickly reverberated within the party, which has struggled with the issue of immigration.

Like Trump’s early derogatory campaign statements about immigrants, his new plan has lit up angry conservatives. But it also has annoyed Republicans who see the nation’s growing Latino population as an opportunity to demonstrate sensitivity to minorities who have voted overwhelmingly Democratic in recent presidential elections.