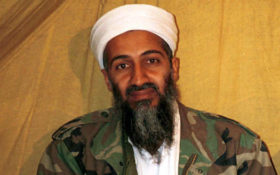 One of the men who played a role in the worst terrorist attack in U.S. history is alive and well – and receiving welfare.

A conservative German political party sued the government and found out one of the unknown number of jihadists living off the taxpayers is none other than Osama bin Laden’s former bodyguard.

The 42-year-old Islamist – whom the press will only identify as “Sami A,” for his protection – collects a fat welfare check every month.

So does his wife, and their four young children (ages 4-11).

Europe is so politically correct that it’s not enough to ask Muslim terrorists to live on its soil and plot to kill its citizens – it has to pay them to do it!

Der Spiegel reports that the man came to Germany from Tunisia in 1997, but then lived in Al Qaeda’s hideout in Afghanistan from December 1999 to June 2000. After completing a 45-day paramilitary training, he became bin Laden’s personal bodyguard and “met with Ramzi Binalshibh, who is considered one of the backers of the 9/11 attacks.”

He eventually settled into the German city of Bochum, where he makes his living preaching Islamist hatred at public expense.

It’s not that he has no skills. He took several high-tech courses – but lives on welfare.

Worse, Sami A. is a “dangerous” influence radicalizing his neighbors, according to security agents in North Rhine-Westphalia, who have had the hate-preacher under surveillance for more than a decade.

‘That such a man is allowed to stay in Germany is a punch in the face to all anti-terror investigators,” said one exasperated security source, who wanted to remain anonymous. “He protected the most wanted man in the world and we treat him with kid gloves.”

To its credit, the government tried to deport him – but German judges said that would be cruel and inhuman to poor Sami!

Since Tunisia hates radical Islamists like al-Qaeda, judges ruled that if he’s deported Sami A. faces “the considerable likelihood” of “torture and inhumane or degrading treatment.”

So, the judges ruled that the radical with terrorist-links is actually the victim – so he stays put, and the welfare keeps on flowing.

“The German asylum law is being shamelessly exploited here,” said a member of Angela Merkel’s ruling party, CDU. “We must finance a terrorist with tax money because we must not deport him?”

The more nationalist Alternative for Germany (AfD) Party isn’t shedding any tears at the thought of bin Laden’s bodyguard dying a slow, painful death in his home country.

“What fate awaits Sami A. in Tunisia is not the problem of German taxpayers,” said Alice Weidel, one of the AfD party leaders in the Bundestag.

The party sued the government and learned that Sami bags a cool $1,423 a month in handouts. “To protect and financially equip an Islamist, to feed hundreds of thousands of illegal immigrants…fits the Merkel Germany of this time,” the AfD said.

A Muslim preacher living in Britain later convicted of supporting ISIS, Anjem Choudary, said that welfare is a way that European Christians and Jews show that they’re in subjection to Muslims.

“The normal situation is for you to take money from the kuffar (infidels),” he said.

A Horn exclusive report on “welfare jihad” recounted how radical imams tell Muslim immigrants to stay at home, collect welfare, and have enough children to take over the country in a generation.

Many of their followers are obeying:

At least three of the 9/11 hijackers were part of an Al Qaeda cell in Hamburg, Germany. Another plotter in the 9/11 conspiracy, Zacarias Moussaoui, received welfare payments while living in London.

Europe’s open borders and free welfare policies are funding jihad against Americans, not just their own people.

Germany, the financial engine of Europe, is sick of footing the bill for millions of unemployed Muslims to breed hate on the public Deutschmark while elderly Germans “have to collect returnable bottles [and] live in poverty,” Weidel said.

Germans could learn a lesson from President Donald Trump.

“I demand that [political] priorities be finally set,” she concluded, “so that the motto of German politics is no longer ‘Germany last’!”