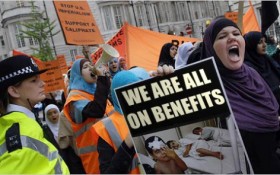 It’s not just bombs and bullets that Islamic terrorists are using to wage jihad against the West.

Radical Islamic leaders have revealed that part of their strategy of conquest is exploiting liberal immigration and welfare policies — leeching off the West’s generous benefits while plotting to establish Islam as the dominant force in countries like Belgium, Denmark, and others.

Terrorists have begun bragging about how the system redistributes money from Christians, Jews, and secularists to Islamists, and saying that their plans involve Muslim “refugees” signing up in droves for unemployment, food stamps, and cash welfare benefits, then using the free time Western taxpayers underwrite to wage jihad.

Drawing on centuries of religious doctrines, many imams teach that non-Muslims must pay a tax – called the jizya – to Muslims as a way of establishing Islamic domination.

They sees welfare to refugees as a modern day equivalent of the infidels bowing and scraping before their Islamic superiors.

An Islamic teacher living in Britain, Anjem Choudary, told his fellow Muslims, “The normal situation is for you to take money from the kuffar [infidels].”

While birthrates in the West decline, the Islamists are focused on having large families and taking over countries demographically.

Choudary specifically bragged in 2013 that “Brussels is 30 percent, 40 percent Muslim.”

And they use their free time to plot violence. Choudary called welfare the “Jihad-Seeker’s Allowance.” And he has been willing to put your money where his mouth is: He is currently on trial for using social media to encourage people to support ISIS.

He is far from alone, in Europe or America.

The data show that Muslims are far more likely to use public benefits than needy Americans. Sen. Jeff Sessions found that more than 90 percent of recent Middle Eastern “refugees” are on food stamps, and almost 70 percent receive cash welfare benefits.

All of this helps Muslim fanatics plan to topple the West from within.

And our leaders could not be more misguided. Over the weekend, Barack Obama used his weekly radio address to day that “our openness to [accepting] refugees” from the Middle East is “another weapon” against terrorism “alongside our airstrikes, our military, [and] our counterterrorism work.”

EU elites have opened the floodgates of violent jihad against its citizens through their open door immigration policy and suicidal welfare state policies. If they won’t solve their problem, at least the United States should – by slamming the door on Muslim immigration and demanding that immigrants who come to these shores can pay their own way.