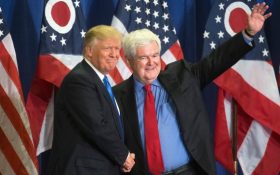 Gingrich pointed out that there’s a key part of Mueller’s conclusion on President Donald Trump that the media won’t show you.

And it changes everything.

Trump is nothing like the impeachment of former President Bill Clinton — because special counsel Ken Starr’s report identified 11 examples of impeachable offenses where he labeled Clinton “GUILTY!”

Mueller’s report on Trump? Zero. He simply told the American people it’s not up to him to make the decision.

It’s further proof that Trump is completely exonerated… even if Democrats don’t want to admit it.

“I always tell people: Go back and look at Ken Starr’s report,” Gingrich responded. “Ken Starr issued a report that had 11 counts on which [Bill Clinton] was guilty. Five of them are obstruction. This count, guilty, this count guilty.”

“If Mueller had issued a report that said Donald Trump was guilty on 11 counts, there would be an impeachment effort,” he explained. “But, it would probably fail because the Senate would not vote to [convict Trump] — Just as the House impeached but the [Democrat-controlled] Senate refused to convict with Clinton, which might have been the correct constitutional solution.”

“But in Clinton’s case, he was guilty enough that he lost his license to practice law in Arkansas, he had to pay a fine, he was clearly guilty,” Gingrich pointed out.

“In Trump’s case, Mueller came back and said, ‘There’s nothing there you can even take him to court on,'” he said. “There is a pretty big gap here.”

Starr’s report included 11 proven instances where Bill Clinton had committed felonies. It was outlined right in the report, with Starr’s opinion that Bill was guilty of these crimes.

Democrats refused to remove Clinton from office. The media cheered them on.

Now, just 20 years later, these same Democrats that are demanding Trump’s impeachment… for zero proof of any crime?

No wonder they call it “Trump Derangement Syndrome.”