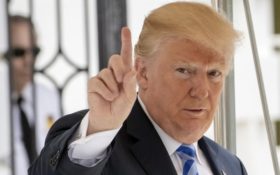 The mainstream media has been on a nonstop attack since special counsel Robert Mueller’s report dropped last Thursday.

The report determined there was zero evidence collusion between President Donald Trump and the Russians during the 2016 presidential election.

The media has spent days trying to spin the report. For example, the talking heads on television claim the report was bad news for Trump. Liberal politicians like Rep. Maxine Waters, D-Calif., have falsely claimed the report had proof of collusion. The liberal media now even claims Mueller left a secret “blueprint” to impeachment for Congress.

But voters aren’t buying it.

According to the latest Rassmussen Polls, Trump’s approval rating actually jumped after Attorney General William Barr released the findings of the special counsel’s probe. At one point on Apr. 16 and 17, the president reached 52 percent approval.

Though the numbers have since dipped a few percentage points in recent days, Trump’s approval rating remains ahead of former President Barack Obama’s polling numbers.

As of Apr. 23, 49 percent of Americans currently approve of Trump’s White House.

At the same point in Obama’s presidency, his approval rating was 48 percent.

So much for the liberal hype.

Despite what the mainstream media wants America to think, the numbers don’t lie.

And he knows it —

In the “old days” if you were President and you had a good economy, you were basically immune from criticism. Remember, “It’s the economy stupid.” Today I have, as President, perhaps the greatest economy in history…and to the Mainstream Media, it means NOTHING. But it will!