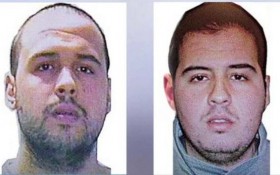 Yesterday’s terror attacks in Brussels were reportedly carried out by two brothers who had previously served time in Belgian prisons for violent crimes — and had been set free.

Now questions are swirling about whether Europe’s continued softness on crime is putting the rest of the world at risk.

The two suspected suicide bombers from Tuesday’s deadly attacks, Ibrahim and Khalid El-Bakraoui, were career criminals that were already known to police.

At a press conference Wednesday, Belgian prosecutor Frederic Van Leeuw admitted that in 2010, Ibrahim was sentenced to nine years in prison by the Brussels criminal court for shooting at police with a Kalashnikov during a robbery of a currency exchange office.

The next year, his brother Khalid was arrested for illegal possession of Kalashnikovs rifles and was later sentenced to five years in prison for carjackings.

It was not immediately clear why either had been let out of prison early.

Authorities have been quiet on the issue, instead focusing on their planned response to the attacks.

“It’s a war that terrorism has declared not only on France and on Europe, but on the world,” French Prime Minister Manuel Valls said Wednesday on Europe-1 radio. Valls, who planned to visit Brussels later Wednesday, urged tougher controls of the European Union’s external borders.

But maybe it’s time for European countries to take a look at the people — especially the criminals — who are already living within their nations.