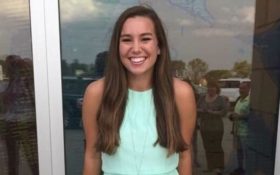 Blake Jack, the brother of a missing University of Iowa student’s boyfriend, says there were no signs of struggle at the home where she had been staying.

“She’s small, but she would have done something,” he told Fox News exclusively.

Mollie Tibbetts, a 20-year-old student, hasn’t been seen since going for an evening jog on July 18 in Brooklyn, a community of about 1,400 people where she was living this summer with the Jacks in a farmhouse.

At a news conference last Tuesday, Kevin Winker, director of investigative operations for the Iowa Division of Criminal Investigation, said investigators haven’t drawn any conclusions about what happened to Tibbetts other than that disappearing on her own “is not consistent with her past.”

The father of Mollie Tibbets last week suggested she might have been abducted from Jack’s home in Brooklyn, Iowa.

Tibbetts’ boyfriend, Dalton Jack, has said he received a Snapchat message from Tibbetts on July 18 around 10:15pm, after she would have returned from her run. It is unclear when exactly the message was sent, but Dalton explained it appeared to have been taken indoors.

Although police and scent dogs have investigated the Jacks’ property several times, Tibbetts’ phone and Fitbit have not been found.

A man from Iowa reported to police that he saw Tibbetts going for a run past his home on the night she went missing.

“I’ve seen her probably three to four times per week,” he said. “She’d kind of jog down the street and towards the hill. I thought nothing of it until I heard somebody was missing, and it really hit me that I hadn’t seen that runner since then.”

Blake explained to Fox News that, “If something happened while on a run, people — like you see right now — our neighbors are outside and would have heard something,” he said.

Bill Moudler, Des Moines’ police chief told the Des Moines Register that a missing person case is typically more difficult to solve, and this case could get more challenging if the suspect is a stranger.

The reward fund for the missing girl has grown past $300,000 and will most likely to continue to grow until she is found.